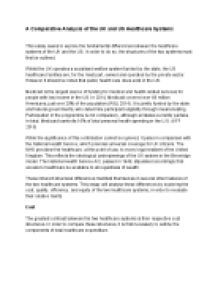 A Comparative Analysis of the UK and US Healthcare Systems

Transfer-Encoding: chunked ﻿A Comparative Analysis of the UK and US Healthcare Systems This essay seeks to explore the fundamental differences between the healthcare systems of the UK and the US. In order to do so, the structures of the two systems must first be outlined. Whilst the UK operates a socialised welfare system funded by the state, the US healthcare facilities are, for the most part, owned and operated by the private sector. However it should be noted that public health care does exist in the US. Medicaid is the largest source of funding for medical and health-related services for people with low income in the US. In 2014, Medicaid covered over 68 million Americans, just over 20% of the population (WSJ 2014). It is jointly funded by the state and federal governments, who determine participant eligibility through means-testing. Participation in the programme is not compulsory, although all states currently partake. In total, Medicaid bankrolls 16% of total personal health spending in the U.S. (KFF 2015) While the significance of this contribution cannot be ignored, it pales in comparison with the National Health Service, which provides universal coverage for UK citizens. The NHS provides free healthcare, at the point of use, to every legal resident of the United Kingdom. This reflects the ideological underpinnings of the UK system in the Beveridge model. ...read more.

In spite of this 80% of patients in the US were offered various options regarding their care, compared to 85% in the UK (Commonwealth fund, 2011). This finding would suggest an alignment between the two systems in terms of the standards service provided to their respective patients. It appears that the UK provides a superior quality of care than the US. However, quality of care alone does not define the effectiveness of a healthcare system. Efficiency In terms of healthcare, efficiency can be defined as the optimal allocation of resources in relation to the costs associated with allocating these resources. Efficiency within the healthcare system is paramount; a lack thereof could lead to unnecessary patient fatalities. The UK spent significantly less on healthcare as a percentage of GDP at 9.3% in 2012 compared to 16.9% in the US (OECD Health Statistics, 2014). Having discussed the differences between the quality of the two systems, it could be inferred that the UK is more efficient than the US in terms of cost. However, the UK wastes over £2 billion a year on unnecessary treatments (Academy of Medical Royal Colleges, November 2014) which demonstrates the existence of inefficiency in the UK healthcare system. Private medical providers in the US are paid per procedure, therefore the possibility that doctors may feel incentivised to prescribe more procedures instead of focusing on patient care- causing inefficiency- cannot be dismissed. ...read more.

Future The US healthcare system’s lauded free market credentials have been shown to be lacking, however solutions to its problems may lie in restoring that prized status. A report by the Economist (2014) suggests that expanding schemes such as Obamacare would improve efficiency by providing more citizens with the ability to shop around for a healthcare plan. Financial incentives and penalties directed at hospitals have so far helped to reduce perverse supply side incentives as mentioned earlier. Regarding the NHS, the concern is with the continued functioning of the current system in the face of demographic and financial pressures. Research has revealed that, while the NHS remains one the UK’s most treasured and valued institutions, actual patient satisfaction has fallen significantly (The Guardian, 2015). This may call for investment in order to bring services back in line with patient expectations, however this is where the NHS’s biggest challenge lies. The NHS is expected to end the current financial year £1bn in deficit, and NHS England has predicted that rising demand for care will leave a £30bn budget gap by 2020, unless productivity increases beyond its current trend (The Guardian, 2015). Economists have therefore stated the need for a debate on the choice between increasing the NHS’s budget versus accepting a lower level of care. Comparing the two countries healthcare systems based on Quality, Efficiency, Cost and Equity give us the general impression that the UK system has the advantage over the US. However, factors mentioned throughout this essay limit the appropriateness of a direct comparison. ...read more.