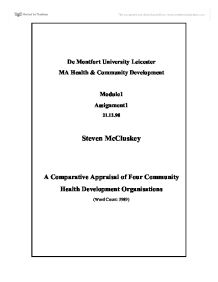 De Montfort University Leicester MA Health & Community Development Module1 Assignment1 21.12.98 Steven McCluskey A Comparative Appraisal of Four Community Health Development Organisations (Word Count: 3989) A Comparative Appraisal of Four Community Health Development Organisations Introduction The following paper is concerned with an analysis of four health development organisations which operate on behalf of communities to improve the health status of the population within the City of Glasgow. It sets out to explore the particular role, approach and contribution of each of these organisations to community development. Each organisation has been selected to demonstrate four strategic levels of operation from it's particular position within the public health field in Scotland. These are: 1. Health Education Board for Scotland (HEBS), the national agency for health education in Scotland 2. Glasgow Healthy City Partnership, Glasgow City inter-agency initiative on health 3. Greater Glasgow Health Board Health Promotion Department 4. East End Health Action Project Community: an exploratory analysis In order to gain an understanding of the sphere of practice of the above organisations in terms of community health development it is helpful to firstly explore what constitutes the definition of 'community'. Although many definitions of community have been constructed (Bell and Newby 1971), the dominant view traditionally focuses on community as a locality or neighborhood (Wellman and Leighton 1979). A broader concept is offered by the Community Development Foundation (1992) where it refers to community development as taking place within 'communities of interest' and neighborhoods. Although this is considered to offer a more expansive conceptual framework in which organisational practice can operate, it does however ignore, the importance of group 'identity' as part of community. This is best summed up by Toronto's Department of Public Health (1994) which describes a community as: "a group of individuals with a common interest, and an identity of themselves as a group. We all belong to multiple communities at any given time (and) ...read more.

The East End Health Action Project is the only organisation of the four which describes itself primarily as a community development project. Therefore it comes as no surprise to find that their theoretical framework is amongst the most developed and advanced of all the organisations. There is an explicit recognition by the organisation that the process of community development should involve action not only at individual and group level but also at societal and organisational levels. An example in practice of this broader approach by the East End Health Action Project focuses on work at individual level to establish a 'Women's Health Group' within a local community. This initiative will link into the development of a city wide health policy for women. This policy is coordinated by the Glasgow Healthy City Partnership organisation, and is featured within their operational plan. In turn, the partnership agency identify the policy as making a link to the development of a Glasgow City Health Action Framework (City Health Plan) which will be used to inform and influence mainstream policy, development plans and action concerned with social, economic and environmental issues, including urban regeneration. The importance of community initiatives accessing and feeding into mainstream structures is highlighted by Cawley et. al (1995) in their analysis of a womens service in North Manchester. It is interesting to note however, that they consider this to be an advantage from the perspective of a service that is part of the NHS. In comparison, the work of the East End Health Action Project serves as a useful case study of how this can also be achieved from a position outwith the NHS. The aforementioned area of activity by the East End Health Action project also highlights the relationship between some of the organisations under analysis in this paper, and the opportunities which exist to support each other in the common objective of achieving positive change through a community development approach. ...read more.

where he states that: "there is a need to formulate workable objectives around ideals, surely this is the only way to ensure new thinking and progressive movement". Inequalities in Health Inequalities in health is identified within all four of the organisations as an area for particular emphasis and priority. Variations in health status are known to exist amongst population groups throughout the UK. Nowhere in Scotland are health inequalities more evident than the City of Glasgow which contains up to 80% of Scotland's classified areas of multiple deprivation (Glasgow Healthy City Project 1995). The reasons for these differentials have been explored and debated at great length since the early 1980's which saw the publication of a considered landmark report (Black 1980) which documented the existence of a relationship between inequalities in morbidity and mortality and social class gradients. An increasing body of evidence has since reaffirmed this position and provides evidence of a widening gap in health inequalities between those in socially advantaged and disadvantaged groups (Whitehead 1989). The recent publication of the government commissioned inquiry into inequalities in health (Acheson 1998) provides us with the most up todate and comprehensive review of the evidence on inequalities in health since the Black report. Summary In conclusion, the four health development organisations are considered to have a significant and important role to play in community health development in Glasgow from their particular strategic level of operation within the public health field. Strengths and weaknesses have been identified and discussed within all the projects, and there are clearly important areas, within all the organisations, which would benefit from being strengthened. There are however, some examples of good theory and practice across all the projects. The relationships and links between the organisations have been highlighted and discussed and it is suggested that these opportunities should be exploited where appropriate. Indeed, these links are considered to be ideal avenues in which each organisation could benefit from the experience and practice of each other. ...read more.