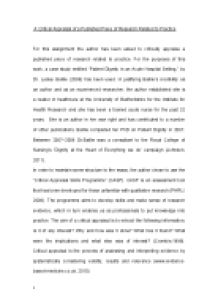 A Critical Appraisal of a Published Piece of Research Related to Practice. Patient Dignity in an Acute Hospital Setting, by Dr. Lesley Baillie (2008)

﻿A Critical Appraisal of a Published Piece of Research Related to Practice For this assignment the author has been asked to critically appraise a published piece of research related to practice. For the purposes of this work, a case study entitled ?Patient Dignity in an Acute Hospital Setting,? by Dr. Lesley Baillie (2008) has been used. In justifying Baillie?s credibility as an author and as an experienced researcher, the author established she is a reader in healthcare at the University of Bedfordshire for the Institute for Health Research and she has been a trained acute nurse for the past 32 years. She is an author in her own right and has contributed to a number of other publications. Baillie completed her PhD on Patient Dignity in 2007. Between 2007?2009 Dr.Baillie was a consultant to the Royal College of Nursing?s ?Dignity at the Heart of Everything we do? campaign (Johnson, 2011). In order to maintain some structure to the essay, the author chose to use the ?Critical Appraisal Skills Programme? (CASP). CASP is an assessment tool that has been developed for those unfamiliar with qualitative research (PHRU, 2006). The programme aims to develop skills and make sense of research evidence, which in turn enables us as professionals to put knowledge into practice. The aim of a critical appraisal is to extract the following information; is it of any interest? Why and how was it done? What has it found? What were the implications and what else was of interest? (Crombie,1996). Critical appraisal is the process of assessing and interpreting evidence by systematically considering validity, results and relevance (www.evidence-based-medicine.co.uk, 2010). The author Baillie (2008) sets out in the abstract her objectives for the case study. ...read more.

The advantage to semi-structured questions is that they can be asked in what appears to be general conversation, which encourages two-way conversation and therefore the researcher can gain additional information. A disadvantage can be that, questions may be slightly different for each participant dependant on how the ?conversation? evolves. Patton (1987) outlined that in qualitative interviews questions should be clear to the interviewee, open-ended, neutral and sensitive. He then went on to suggest various types of questions that should be asked. These included experiences or behaviour, values, on knowledge, on feelings, on opinions and demographical or background details. Baillie in her (2008) case study considered the relationship between herself and the participants and how she could create the most natural and relaxed conditions, ensuring the participants acted ordinarily and without oppression. By wearing a nurse?s uniform in the ward environment, she was able to develop relationships both with the patients and the staff whilst working shifts and prior to any collection of data. Baillie (2008) in recognition of researcher bias maintained a researcher?s diary with reflective observations. Reflexivity is an important self- evaluating tool, as it identifies the researcher?s own values, prejudice?s and behaviour in any given situation and the interpretation of responses (Parahoo 2006). Following her earlier findings, Baillie (2008) later discussed them with the participants to verify they were credible. The Data collected throughout the study was analysed manually using a framework approach, which is primarily used in health care settings. It is a process, which is flexible in allowing analysis during and also at the conclusion of data collection. By listening to audiotapes and reading transcripts of field notes, the researcher was able to absorb the data and become aware of key ideas and recurrent themes (Ritchie and Spencer, 1994). ...read more.

The close proximity of beds with only curtains to maintain privacy was also an issue due to the fact that other patients on the ward could hear what was being said between the staff members and the patient. The attitudes of staff also had an effect on patients? dignity. Half the patients interviewed described how one member of staff had a curt manner, which could be interpreted as being ?off handed? or even rude. The most important aspect of maintaining patient dignity was privacy, i.e. pulling curtains around beds and avoiding bodily exposure. All the ward staff, five of the six senior nurses and half the patients that were interviewed, agreed and confirmed this. As healthcare professionals we are all morally bound to upholding patient dignity. We are regulated by the Nursing Midwifery Council (NMC, 2008) code of conduct, but the overriding principles of dignity, humanity and equality are legislated for under the Human Rights Act 1998 and the Equality Act 2010, (Jackson, 2011). Conclusion In 2010 the Care Quality Commission (CQC) carried out their annual survey. More than 66,000 patients who were discharged between June and August of that year from 161 acute and specialist trusts took part. Approximately 2,000 (3%) of these patients revealed they were not treated with dignity and respect whilst in hospital and a further 12,000 (18%) said they had been treated with dignity and respect ?sometimes? but not always. This survey showed there had been no improvement since 2002 (Stephenson, 2011). Although steps are being taken to educate healthcare professionals regarding patient dignity, it never the less remains an important issue at the core of NHS values. Dignity remains an often-overused phrase but underperformed action within the healthcare environment. ?Patient dignity? is a right, not a concession that health care professionals can hand out when it best suits them. ...read more.