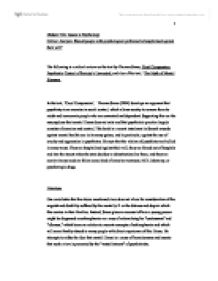 A critical review on the text by Thomas Szasz; Cruel Compassion: Psychiatric Control of Society's Unwanted, and also of the text, 'The Myth of Mental Illnesses.

Module Title: Issues in Psychology Critical Analysis: Should people with psychological problems be hospitalised against their will? The following is a critical review on the text by Thomas Szasz; Cruel Compassion: Psychiatric Control of Society's Unwanted, and also of the text, 'The Myth of Mental Illnesses. In the text, 'Cruel Compassion', Thomas Szasz (1994) develops an argument that psychiatry is an exercise in social control, which allows society to remove from its midst and incarcerate people who are unwanted and dependent. Supporting this are the assumptions that mental illness does not exist and that psychiatric practice largely consists of coercion and control. This book is a recent instalment in Szasz's crusade against mental health care in its many guises, and in particular, against the use of cruelty and oppression in psychiatry. He says that the victims of psychiatry are bullied in many ways. They are hospitalized against their will, they are forced out of hospitals and into the streets when the state decides to deinstitutionalize them, and they are nearly always made to follow some kind of invasive treatment, ECT, lobotomy, or psychotropic drugs. Literature One could state that the above mentioned view does not allow for consideration of the anguish and disability suffered by the mentally ill or the distress and despair which this creates in their families. Instead, Szasz gives an account of how a young person might be diagnosed as schizophrenic as a way of rationalising his "uselessness" and "idleness," which bears no relation to current concepts of schizophrenia and which will seem frankly absurd to many people with direct experience of this illness. ...read more.

Moreover, why not address the issue of psychiatric 'help', and ask whether mentally ill people who break the law could not be offered drugs, counselling, or even temporary hospitalization? One does not need to share Szasz' philosophical and political views in order to share his indignation at the treatment meted out to those diagnosed as mentally ill, nor to recognize our tendency to 'store' away those we cannot interact with. This leads to the question whether the political and philosophical views in question do form an important part of Szasz' arguments. In particular, his claim that there is no such thing as mental illness (undefended in this book) is not needed to conclude that schizophrenia (the condition he focuses on) is an unauthentic category, or that being diagnosed as mentally ill does not justify having one's liberty taken away. Szasz believes that giving some people power over others is commonly justified in the name of "compassion." In the article 'The Inhumanity of "Compassionate" Compulsion' (Reviewed by Jim Powell, J. November 1995), it is demonstrated by Szasz that "compassion" is a cover for oppression. He provides shocking historical perspective on the inhumanity of compulsion. He tells how 18th century English "reformers" like Jeremy Bentham promoted rounding up indigent people in "poor houses," so they would be out of sight and under control. Szasz talks about supposedly benevolent 19th century psychiatrists who urged that epileptics be forced into "therapeutic communities." ...read more.

His own good, either physical or moral, is not sufficient warranty." (Mill 1859, quoted in Szasz 1971, pp 349-340). Mill made an exception for those without the full use of their reason but Szasz does not do likewise. According to Szasz (1978), it is a precondition of a free society that we do not force help on one another. We must be free to make our own choices and decide what is in our own best interest. In a society pledged to the advancement of individual freedom and responsibility, the State, the family and the medical profession must restrict themselves to offering help. He goes on to say that the law should prevent them forcing help on unwilling people. However, he does not say that compulsory psychiatry is always harmful to the patient. His basic case is that it is unable to coexist with a free society. He says, in fact, that some increase in liberty gained by outlawing compulsion, might be at the cost of the impaired health or even death of some people who, he says, make themselves ill, or who want to kill themselves. He says that freedom, to a certain extent, entails the right to make the 'wrong' choice. William Blackstone (1723-1780) in his Commentaries on the Laws of England, wrote that: "It was the doctrine of our ancient law, that persons deprived of their reason might be confined till they recovered their senses." There are two long established reasons for the legitimate use of compulsion against mad people: 1. the protection of society 2. compassion for the mad person. ...read more.