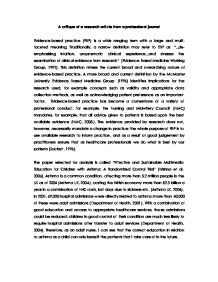 A critique of a research article from a professional journal

A critique of a research article from a professional journal Evidence-based practice (EBP) is a wide ranging term with a large and multi-faceted meaning. Traditionally, a narrow definition may refer to EBP as "...de-emphasising intuition, unsystematic clinical experience...and stresses the examination of clinical evidence from research" (Evidence-Based Medicine Working Group, 1992). This definition misses the current broad and overarching nature of evidence-based practice. A more broad and current definition by the McMaster University Evidence Based Medicine Group (1996) identifies implications for the research used, for example concepts such as validity and appropriate data collection methods, as well as acknowledging patient preference as an important factor. Evidence-based practice has become a cornerstone of a variety of professional conduct, for example, the Nursing and Midwifery Council (NMC) mandates, for example, that all advice given to patients is based upon the best available evidence (NMC, 2008). The evidence provided by research does not, however, necessarily mandate a change in practice: the whole purpose of EBP is to use available research to inform practice, and as a result of good judgement by practitioners ensure that as healthcare professionals we do what is best by our patients (Sackett, 1996). The paper selected for analysis is called "Effective and Sustainable Multimedia Education for Children with Asthma: A Randomized Control Trial" (Krishna et al. 2006). Asthma is a common condition, affecting more than 5.2 million people in the UK as of 2004 (Asthma UK, 2004), costing the British economy more than �2.3 billion a year in a combination of NHS costs, lost days due to sickness etc. (Asthma UK, 2004). In 2001, 69,000 hospital admissions were directly related to asthma: more than 40,000 of these were adult admissions (Department of Health, 2001). With a combination of good education and access to appropriate healthcare services, these admissions could be reduced: children in good control of their condition are much less likely to require hospital admissions after transfer to adult services (Department of Health, 2004). ...read more.

Data collection methods refer to the methods/tools used by the researchers to obtain their data for analysis. In this case, the data collection methods included a variety of questionnaires were used, as well as demographic forms and the physiological measurement of forced expiratory volumes/flows (FEV): both FEV1 and FEF75%. A questionnaire is popular method of data collection, especially for quantitative research, mainly because it is predetermined, standardised and structured: three important and defining factors in quantitative research (Leung, 2001). That is not to say that, when correctly used, it does not have a place within qualitative research (Hek & Moule, 2006). Questionnaires, in this case, were used for the most of the data collection. The use of questionnaires, although potentially quite difficult, can be advantageous. A well-designed questionnaire can be a fast, objective and comprehensive tool used to collect large amounts of data from very large populations in a reasonably small time frame (Milne, 1999). In this case, the questionnaires were filled out within the environment of the clinic, meaning that not only could several different people be participating at the same time, response rates would also have been exceptionally high (a common downfall of the questionnaire can be poor return rate). Questionnaires can be quite difficult to design and implement for several different reasons. For example, they can be expensive to develop and may require piloting before mainstream use (Parahoo, 2006). In this case, the majority of the questionnaires were designed by the researchers themselves, rather than using previously-validated examples, which could be costly (Parahoo, 2006). In such a case, the reliability and validity of the tool could be called into question. The lack of independent validation can mean that a poor quality questionnaire is employed, which could then impact upon the validity of the results (Milne, 1999). The results of questionnaires can also be quite limiting: respondents may not get to sufficiently give their views as there is no facility for this in a standardised format (Milne, 1999). ...read more.

A recent study by Lintonen et al (2007) intimated that the use of information technology, although still in its infancy, had the potential to be developed into a powerful tool for health promotion, as demonstrated through several different current applications, such as smoking cessation. The Essence of Care Health Promotion Benchmarks (DOH, 2006) indicate that patients should have access to information in a way that meets their needs, as well as identifying that a range of different methods should be used in health promotion. This system could be another method by which this is achieved. With regard to current policy, this study neither supports nor challenges: instead, it seeks to augment current practice with the addition of another type of intervention. Conversely, it does raise some interesting questions regarding current policy. For example, why this type of intervention has not been further researched or even already implemented? As the research in itself appears to be quite limited in several ways, further research into the topic could pave the way for such a system to be implemented within the UK. This further research, of course, would need to be quite different from the current research. For example, a much larger sample size would help to provide further validity to findings, whereas integrating more qualitative methods, such as possibly interviewing a selection of participants may help to provide further depth. This particular piece of research fits into practice in a number of ways. It has allowed the exploration of several key ethical issues in more depth, such as consent issues for children and adults, as well as issues surrounding informed consent. As little was mentioned with regard to informed consent, it can only be assumed that this was not felt relevant, something from a healthcare angle can be seen as quite unprofessional. It has also shown that information technology in healthcare should be used much more comprehensively: the technology is available for health promotion systems such as this to be implemented, something that patients may find useful. ...read more.