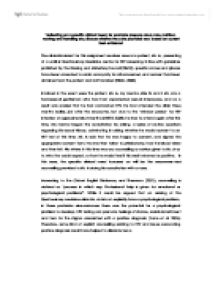 Reflecting on a specific clinical need, for example pressure area care, nutrition, moving and handling etc; discuss whether the care provided was based on current best evidence

'Reflecting on a specific clinical need, for example pressure area care, nutrition, moving and handling etc; discuss whether the care provided was based on current best evidence' The clinical incident for this assignment revolves around a patient, Mr. A, presenting at a walk-in Genitourinary Medicine centre for HIV screening. In line with guidelines published by the Nursing and Midwifery Council (NMC), specific names and places have been amended to retain anonymity for all concerned, and consent has been obtained from the patient and staff involved (NMC, 2008). Involved in the event were the patient, Mr. A, my mentor, Miss D, and I. Mr. A is a homosexual gentleman who had had unprotected sexual intercourse, and as a result was worried that he had contracted HIV. He had attended the clinic three months earlier, just after the encounter, but due to the 'window period' for HIV infection of approximately 3 months (AVERT, 2009), he had to attend again after this time. My mentor began the consultation by asking a series of routine questions regarding his sexual history, culminating in asking whether he would consent to an HIV test at this time. Mr. A said that he was happy to consent, and signed the appropriate consent form. He was then taken to phlebotomy, had his blood taken and then left. No where in this time was any counselling or advice given to Mr. ...read more.

According to the guidelines produced by the British HIV Association (BHIVA), a pre-test discussion relating to the HIV should be offered to all patients requesting an HIV test within a genitourinary setting (BHIVA, 2008). Specifically, it is recommended that the discussion explores any of the patient's conceptions or possible misconceptions around the testing and a positive result. This discussion could have identified any potential worries or fears that Mr. A was experiencing, many of which may have been calmed when given the appropriate information. The Joint United Nations Programme on HIV/AIDS (UNAIDS) advocates a "3 C's" approach to HIV testing: Confidentiality, Counselling and informed Consent (UNAIDS, 2004). According to this principle, only one of the three criteria was being met, in that the testing was confidential. As no counselling was provided, this criterion could not be met. Also, by omitting the counselling, it is questionable whether informed Consent was obtained from the patient, as no attempt to ascertain his level of understanding was made. This again can be related to the NMC guidelines. Although the NMC Code of Conduct (NMC, 2008) does not explicitly demand that informed consent to be obtained from a patient, it does call for nurses to ensure that patients are given the information that they need in a way that is accessible to them: they must understand what is being said. ...read more.

Although I am not professionally accountable to the NMC for my actions, morally I should have spoken up and made sure that the patient received the best care possible. By not speaking up, my mentor was not given the chance to correct her omission, and by extension, it cannot be known whether the patient had been giving informed consent. Unfortunately, I do not thing that I could have actually offered the counselling, as I am not experienced enough in either the field of nursing or counselling to have conducted this act properly had the patient requested it. Although, perhaps offering the counselling may have prompted my mentor to pass this task along to another member of staff, or possibly attempt it herself. Of course, the very fact that I did question my mentor may have sparked something within her that will enable to her to alter her practice, and therefore ensure that all following patients get the best experience of GU medicine that they can. If I found myself in this situation again, I feel more confident with respect to the guidelines and processes surrounding HIV pre-test counselling. The very fact that I found myself in a situation that I was unsure of and therefore unable to deal with left me feeling that I should perhaps have researched more thoroughly the role of counselling in HIV testing, something that I have now done. I would therefore feel much more confident speaking up on behalf of the patient and ensuring that they were cared for following the best evidence available. ...read more.