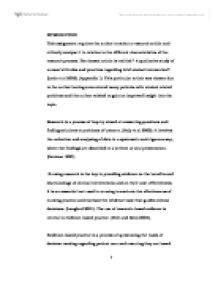 INTRODUCTION This assignment requires the author to select a research article and critically analyse it in relation to the different characteristics of the research process. The chosen article is entitled " A qualitative study of nurses' attitudes and practices regarding brief alcohol intervention". (Lock et al 2002). (Appendix 1). This particular article was chosen due to the author having encountered many patients with alcohol related problems and the author wished to gain an improved insight into the topic. Research is a process of inquiry aimed at answering questions and finding solutions to problems of concern. (Daly et al 2002). It involves the collection and analysing of data in a systematic and rigorous way, where the findings are described in a written or oral presentation. (Parahoo 1997). Nursing research is the key in providing evidence on the benefits and shortcomings of clinical interventions and on their cost-effectiveness. It is an essential tool used in nursing to evaluate the effectiveness of nursing practice and increase the evidence base that guides clinical decisions. (Langford 2001). The use of research-based evidence is central to evidence-based practice. (Polit and Beck 2004). Evidence-based practice is a process of questioning the basis of decision-making regarding patient care and ensuring they are based on the best available research evidence. (Kenworthy et al 2002). Decisions are based on research rather than traditional approaches such as personal experiences, and intuition. (Hewitt-Taylor 2002). Evidence-based practice is a vital component of clinical governance in achieving clinical effectiveness and quality services for patients. (McSherry and Haddock 1999). Clinical governance is a framework through which National Health Service organisations are accountable for continuously improving the quality of their services. (Kenworthy et al 2002; Hek 2000). It aims to maintain and improve standards of care through quality improvement activities such as monitoring the performance of clinical professions, staff development and risk management. (Cranston 2002). A key element of clinical governance is clinical effectiveness. ...read more.

Samples in qualitative research are usually small in number but can still provide rich data. (Langford 2001; Carnwell 1997b). However the small sample size in qualitative research causes difficulty in generalizability. (Bluff 1997). Out of the twenty-eight nurses invited to participate in the study twenty-four agreed to take part. All the nurses had previous experience in using or examining brief alcohol intervention materials in a previous implementation trial involving two of the researchers. The researchers specified they used convenience and purposive sampling to recruit the participants. Convenience sampling is the use of individuals that are conveniently available rather than selecting from the population. This method is often used in preliminary research interviews to estimate the results without incurring large costs or to save time. (Cormack 2000). Parahoo (1997) recommends that researchers must explain their sampling method and present reasons why the sample was chosen. The choice of convenience sampling in the study was not explained or discussed. The sample was used to enlist ten of the participants of whom had been directly involved in the previous trial. In limiting this sample to nurses known to the researchers perhaps imposes unnecessary limitations and have an impact on the richness of the data. Although this sample method could bring significant information to the study, it may not indicate how typical the information is to the population. As the study developed, an additional fourteen nurses were purposively sampled. Purposive sampling is a process where the researchers consciously selects participants who can provide the required data and who are willing to participate in the study. (Burns and Grove 2003). Fossey et al (2002) and Cutcliffe (2000) are of the opinion that purposive sampling should be used when selecting appropriate information sources to explore meaning. They further go on to say that in the case where individuals are selected to explore emerging theories it is termed theoretical sampling. The author is of the opinion that theoretical sampling was used in this case. ...read more.

While their experiences can be seen as a possible benefit they may have preconceived ideas that might influence the study. The author questioned the researchers sampling and coding procedures as they do not appear to echo the grounded theory method. Baxter (2001) expresses that any conflicts of interest such as sponsorship for undertaking a research project should be declared in the research article. The researchers were supported by an alcohol education and research council grant and which was documented at the end of the article. This in turn may have prevented the researchers having an objective view of the study. The study achieved its goal and gave the author an improved insight into the obstacles perceived by nurses relating to alcohol prevention and the patient's reactions. The researchers made a recommendation for a multifaceted framework to be implemented to achieve effective intervention in promoting nurses involvement in alcohol issues. A diagram of the framework was presented in the article, which helped in demonstrating clearly what the framework consisted of. According to the researchers the framework was currently being evaluated in primary health care. The author felt that this was confusing and contradictory as the researchers made a recommendation for the framework but then stated it was already being implemented elsewhere. Another recommendation in the article was that the study be replicated but on a wider scale. The author is in agreement with the researchers cited limitations. They accepted that having separate people interviewing and data analysing was not without its faults and implemented a strategy to reduce any misinterpretations. The study was limited to nurses from the same geographical are and previous experience in the topic studied however it was expressed that they obtained no data to indicate that this had an effect on the data. The researchers have a comprehensive reference page with a total of forty-two references. All articles cited were accurately referenced apart form the Health Service Guidance. There were many useful references cited which can be followed up to gain a wider insight to the topic. ...read more.