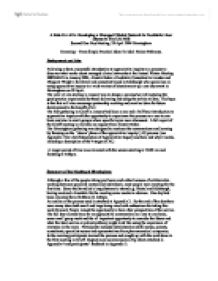 A Role For Ai In Developing a Managed Clinical Network in Paediatric Liver disease in The UK NHS Second One Day Meeting, 29 April 2004 Birmingham Dreaming - From Simple Practical Ideas To Ideal Patient Pathways. Background and Aim Following a short, successful introduction to appreciative inquiry as a process to discover what works about managed clinical networks at the Annual Winter Meeting BSPGHAN in January 2004, Alastair Baker a Paediatric Consultant in London and Margaret Wright a facilitator and consultant based in Edinburgh who specialises in using appreciative inquiry in a wide variety of situations set up a one day event in Birmingham on 29 April. The over all aim starting in January was to design a process/way of capturing the good practice experienced by those delivering and using the service to date. The hope is that this will also encourage partnership working and creative ideas for future development to the benefit of all. The first gathering in Crieff in January had been a one and a half hour introduction to appreciative inquiry with the opportunity to experience the process on a one to one basis and also in small groups where specific topics were discussed. A full report of the Crieff meeting is available on request from Alastair Baker. The Birmingham gathering was designed to continue the conversations and learning by focusing on the ' dream' phase of the appreciative inquiry ( AI) process ( see Appendix 1 for a brief description of Appreciative Inquiry and how and why it works, including a description of the 4 stages of AI.) A longer period of time was allocated with the session starting at 10.00 am and finishing at 4.00pm. Summary of the Meeting at Birmingham Although a few of the people taking part knew each other because of collaborative working between specialist centres and individuals, most people were meeting for the first time. ...read more.

The people involved feel a sense of responsibility and ownership for their decisions and actions. There is a growing recognition that small changes in our words, in our style of speech and our working interactions have an affect on everyone around us and ultimately in the nature of the organisation itself. Indeed even a small group of people who change the way they act together can fundamentally change the organisation towards an agreed goal and make that goal a reality. Appendix 2 Process Birmingham 29 April 2004 Children's Liver Disease Network. 1 As people came into the room we greeted them and allowed them to settle as a number had travelled a good distance and had also had to navigate around Birmingham and organise car parking etc. Tea and coffee and biscuits were available. 2 Once a reasonable number of people had joined the meeting we did a very short introduction with Alastair Baker explaining the definition of a managed clinical network and a little bit about the earlier meeting in Crieff. He explained that there was another opportunity today to carry on with discussions both in learning from the expertise of those in the room but particularly around looking to the future of the network. 3 Margaret Wright gave a short explanation of Appreciative Inquiry as a process that focused on the positive and what worked. It was particularly effective at enabling people with different perspectives to find out what they had in common and to share their experiences and hopes for the future. 4 Participants were then asked to find someone they did not know and to ask each other about their experience of this network working at its best. They had 30 minutes in which to do this. 5 Some pairs finished earlier than others and were asked to write on a post it one possibility they saw for this network in the future. 6 Participants were asked to select from 5 topics written on prepared flip charts around the room. ...read more.

Health, managed clinical networks have a key role in bringing together patients and health professionals from all disciplines to plan services locally, based on local needs and priorities, but to nationally agreed standards. They also ensure traditional boundaries - primarily between GP-based and hospital services, are broken down so that patients receive integrated treatment and care based on their individual requirements - not based on buildings or organisations. Dr Alastair Baker, Consultant Paediatric Hepatologist at King's College Hospital, London is leading a project which aims to identify the facets of effective managed clinical networks for the care of children with liver disease in the UK. To achieve this aim Dr Baker is organising a series of meetings around the country to which as many people (stakeholders) who have an interest in the care of children and families with a liver disease are invited to take part. To date, two successful and thought provoking meetings have been held; one in Crieff, Scotland and the other in Birmingham. Facilitated by Dr Baker and Margaret Wright, the meetings use a technique called Appreciative Inquiry to help people focus on and share the best aspects of the experiences they have had with the service. From voicing the positive experiences the group moves onto visualising the sort of managed clinical network they would like. Through successive meetings a complete picture of a future structure and needs can be developed and eventually put forward to bodies that can influence or make change happen. The meetings may also help influence change in the individuals who take part. Often this is an essential part of achieving the overall goal. Key to the meeting is talking, sharing and listening. In doing so, individuals start to appreciate the viewpoints and needs of others and can use this information to influence their own approach and practice. The technique is enormously powerful and can lead to change happening in a positive way with all the stakeholders feeling involved and signed up to the new pathway discerned. ...read more.