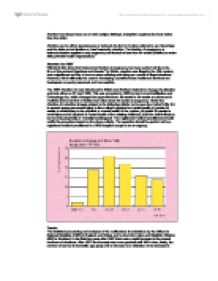 Abortion has always been an emotive subject. Sahaya Josephine explores the facts rather than the ethics

Abortion has always been an emotive subject. Sahaya Josephine explores the facts rather than the ethics Abortion can be either spontaneous or induced, the former is often referred to as miscarriage and the latter as termination or, less frequently, abortion. Termination of pregnancy or induced abortion applies to any pregnancy terminated at less than 24 weeks (Britain) or under 500 g (World Health Organization).1 Abortion Act 1967 Historical data show that induced termination of pregnancy has been performed since the time of the ancient Egyptians and Greeks.2 In Britain, abortion was illegal in the 19th century and a significant number of women were suffering and dying as a result of illegal abortions. However, this is still sadly the case in developing countries where healthcare services are inadequate or poorly resourced and inaccessible. The 1967 Abortion Act was introduced in Britain (not Northern Ireland) to change the situation and took effect on 27 April 1968. This was amended in 1990 by the Human Fertilisation and Embryology Act, which changed the upper limit from 28 weeks to 24 weeks as advances in medicine led to survival of babies born after about 24 weeks of pregnancy. ...read more.

Many women are in stable relationships and one in five is married with about half the women having a child already. Abortion services Almost 90% of abortions are in the first 12 weeks of pregnancy with just 1% occurring after 20 weeks. Legal abortion is very safe especially if carried out in the first 12 weeks of pregnancy. Late abortions can be due to poor access to healthcare services in early pregnancy, the woman being unaware of being pregnant because of irregular periods, concealment or change in personal circumstances, and detection of fetal abnormality. In England and Wales the NHS pays for about 74% of abortions with regional variations ranging from 50% to 90%. In Scotland more than 95% of abortions are free. A woman may have to pay �200 to �500 at a private clinic simply because of where she lives.3 In 1999 almost 10 000 women travelled to Britain for an abortion; most of these were from Northern Ireland and the Irish Republic. A small number came from countries such as France and Italy where the procedure is legal only until 12 weeks and from Arab states where the service is not available or in order to maintain confidentiality. ...read more.

services.7 The availability of medical abortifacients combined with strengthened post abortion care services can legitimately be considered a public health success in countries in which safe abortion services are non-existent and law reforms are unlikely.8 Conclusion Abortion can spark a debate between people who support it and those who strongly oppose the procedure. Although public opinion polls show overwhelming support for the Abortion Act, there have been several attempts to restrict the law by antiabortion groups. But it should not be forgotten that in developing countries 13% of maternal mortality is abortion related.7 No woman should be forced to carry on with an unwanted pregnancy as this can have detrimental effects not only on her physical and mental health but more so on the unwanted child. It is important that the choice is made at an individual level with adequate support from both professionals and family involved in caring for the women. Today more is known about the epidemiology of abortion than any other operation in the history of medicine. I agree with Cates and his colleagues that when future medical historians look back on the twentieth century the increasing availability of safe, legal abortion will stand out as a public health triumph.9 ...read more.