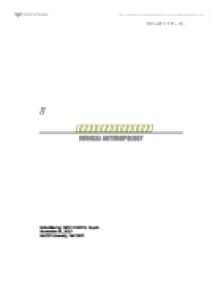 ?????????????? MEDICAL ANTHROPOLOGY Submitted by: DIEU HOANG, Quynh November 25, 2003 McGill University, Fall 2003 Before a dissertation on the impact of the pandemic AIDS on Africa can begin, one must first start with an overview of the continent's historical, socio-cultural and economic reality to fully understand why AIDS spread so quickly by bringing into clarity situational factors of poverty, patterns of sexual networking, cultural practices, the subordinate positions of women, wars and migrant labour that contributed to a conflagration of AIDS dispersion. It is my intention to shed light on these factors in the hopes of alleviating issues of liability and a 'blame the victim' attitude must be cast aside in order to formulate assistive economic help before health policy planning can be undertaken. ???????????? In the last century, acquired immune deficiency syndrome (AIDS) has probably become one of the most important communicable diseases due to its biological complexity, global impact, diverse modes of transmission, invariable fatality, and the numerous challenges posed to scientific research and researchers. One significantly important characteristic of AIDS serving to separate it from other types of communicable diseases is that many socio-cultural and economic issues are involved and inter-play to produce a virulent circle of disease propagation. Economic problems of poverty, financial hardship and survival strategies intermingle with socio-cultural issues of gendered sexuality and sexual behaviors to hamper/hinder the containment of the disease. HIV first emerged in Africa during the early 1970's but did not garner much concern or attention until around the early 1990s when global health care communities and agencies became alarmed at the explosion in the incidence rate of infected individuals and as well, the related mortality rates that rapidly followed. Due to a high illiteracy prevalent in these countries, the efforts of local agencies in the health sector to educate inhabitants on the topic of AIDS failed miserably. Governmental officials took a passive stance and were persistent in their denials that the disease existed counter-arguing instead that AIDS was but a mere fiction, a fabrication on the part of global organizations to interfere with the politics and governing of its countries. ...read more.

In Africa, there is more sexual contact between people of different generations; there is a misplaced and misguided notion that young adolescent girls are less likely to be HIV-infected and as such, they are sought as sexual partners by older and middle-aged men who offer lavish gifts and monetary compensation. In a continent reputed to be the poorest, with the lowest gross national product and per capita income (Williams), many girls either give in by necessity or succumb by desire. By the time these girls marry, they are already infected with the virus and unknowingly infect their husbands (who engage in extra-marital sex) also pass the virus on to his younger mistresses. In Europe and North America the relatively low prevalence of heterosexual transmission after a decade of HIV epidemic is still under maintained and dispersion is also relatively under control. ??????? Patterns of sexual networking alone did not exacerbated the spread of AIDS in Africa. The continent's high poverty has certainly accelerated its proliferation across its 52 countries from rural Kenya to metropolitan Burkina Faso. The majority of Africans do not have the monetary means to protect themselves; many cannot afford condoms or antibiotics to treat other kinds of STDs which are frequently common in Africa. An important AIDS-related implication of this is that a person's risk for HIV increases significantly if they have a genital discharge or ulcers; genital discharge and ulcers create open sores and inflamed mucosal surfaces that enables the virus to enter the body more easily. Poverty creates financial constraints and limitations that forces poor people to undertake dangerous jobs (Nguyen). Many African women, having little choice and no employment opportunities, resort to prostitution. The risk for HIV infection increases in situation where clients will offer more money for unprotected sex; in most cases, the women will habitually agree. Numerous studies found that African women's survival strategies were largely dependent on the exchange of sexual favors (Turshen). ...read more.

Both are crucial in the sense that individuals' views, attitudes and socio-economic reality will determine their behaviors in terms of a model of preventative health as opposed to a simplistic health model of treatment and compliance. In regards to AIDS, a model of preventative health is required to ensure that the disease be contained and to avoid a historical repeat of an epidemic population wipeout as that of the Bubonic Plague which killed over 25 million people in Europe within five years only. A health model of treatment and compliance should not be the focus and goal regarding AIDS intervention in Africa insofar that there exist no present vaccine and cure for the virus. A model of health treatment is ineffective, unproductive and without medical rationale if it discounts socio-economic factors such as poverty and structural and gender inequalities. If interventions around are to be effective, they must address the factors which drive the epidemic. Such factors are deep-seated and intransigent, embedded in the very political, cultural and economic context which define the behavioral responses towards such intervention programmes. ?????????? Baylies, Carolyn and Janet M. Jujra. 1999. " Solidarity and Stress: Gender and Local Mobilization in Tanzania and Zambia." In Families and Communities Responding to AIDS, ed. Aggleton, Peter, Graham Hart and Peter Davies, eds. 35-52. New York: UCL Press. Chapman, Rachel, Julie Cliff and Rosa Marlene Manjate. 2000. " Lovers, Hookers, and Wives: Unbraiding the Social Contradictions of Urban Mozambican Women's Sexual and Economic Lives." In African Women's Health, ed. Meredeth, Turshen, 49-68. Trenton: Africa World's Press, Inc. Crush, Jonathon and James, Wilmont, eds. 1995. Crossing Boundaries: Mine Migrancy In A Democratic South Africa. Ottawa: International development Research Centre. Guest, Emma. 2003. Children of AIDS: Africa's Orphan Crisis. London: Pluto Press. Kuate-Defo, Barth�l�my. 1998. Sexuality and Reproductive Health During Adolescence in Africa. Ottawa: University of Ottawa Press. Nguyen, Vinh-Kim. "Ties That Might Heal: testimonials, Solidarity and Antiretrovirals in West Africa." An Introduction To Medical Anthropology: Selected Readings, ed. Sandra Hyde, 403-437. Williams, Olufemi A. 1991. AIDS: An African Perspective. Boca Raton: CRC Press. ????????? 2 ????????? ...read more.