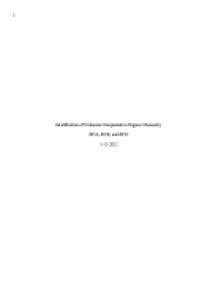 ﻿Identification of Unknown Compounds in Organic Chemistry: #35A, #35B, and #35C 5-11-2012 Introduction There are many reasons for identifying an unknown compounds. The reasons range from medical purposes, such as determining if the unknown could cause ailments in living things or knowing what chemical compounds are needed to make antibiotics to other purposes such as knowing the exact compound has to be used to make certain foods. The purpose of this experiment was to determine the identity of unknown #35A, #35B, and #35C by making use of their physical characteristics, solubility tests, chemical classification tests, and spectroscopy data (Pavia, Lampman, Kriz, & Engel, 2006). First of all, a preliminary classification of the unknown compounds #35A, #35B, and #35C was done by recording the physical state, color, and odor of the unknown compounds. Following that, the melting point for unknown #35A and #35C was obtained; whereas, the boiling point for #35B was obtained due to its physical state, and solubility tests were performed as outlined the Figure 1. Figure 1. Solubility chart for compounds containing various functional groups (Pavia, Lampman, Kriz, & Engel, 2006). After that, the IR and NMR spectra were determined for the unknown compounds in order to provide more evidence for the preliminary results and confirm the identity of the unknown compounds #35A, #35B, and #35C. The chemical classification tests chosen for this experiment were the following: DNPH Test, Beistein Test, Tollens Test, Iodoform Test, HNO2 Test, Lucas Test, and Acetyl Chloride Test. The DNPH Test is used to identify aldehydes and ketones and the Formation of a precipitate is a positive test. The mechanism is shown in Figure 2. ...read more.