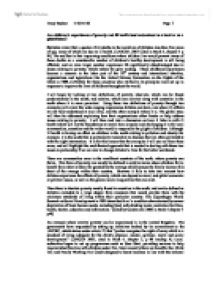 Are children's experiences of poverty and ill health best understood as a local or as a global issue?

Are children's experiences of poverty and ill health best understood as a local or as a global issue? Statistics reveal that a quarter of all deaths in the world are of children less than five years of age, many of which are due to ill health. (UNICEF, 2001 Cited in Book 4, chapter 3 p 95) The sad fact is that improving conditions where children live would prevent many of these deaths as a considerable number of children's healthy development is still being affected, and an even larger number experience life significantly disadvantaged due to issues relating to poverty, which makes for grim reading. These childhood experiences became a concern in the latter part of the 20th century and international charities, organisations and legislations like the United Nations Convention on the Rights of the Child in 1989, (UNCRC) for those countries who ratified to its principles were set up in response to improve the lives of children throughout the world. I will begin by looking at two definitions of poverty, absolute, which can be found predominantly in the south, and relative, which can co-exist along with countries in the north where it is more prevalent. Using these two definitions of poverty through two examples will reveal the wide-ranging experiences children can have, one when it's effects are not fully understood at local level, and the other example where it is. The global issue will then be addressed explaining how their organisations either hinder or help address issues relating to poverty. ...read more.

(Cited in Book 4 chapter 2 p72) This way the equal distribution of available monies reaches even the poorest of children living in the shantytowns. This can be particularly important for the children from ethnic minorities who tend to experience multiple forms of social exclusion and deprivation. (Book 4 chapter 2 p73) Globally, children's experience of relative and absolute poverty is better understood, at least in the north. For example, evidence suggests the effects of it are to blame for many of the social problems today ranging from crime to low achievement in school to shortened life expectancy. The European Union is one organisation who has responded by setting specific goals to 'make a decisive impact on the eradication of poverty' at the turn of this century. (UNICEF Book 4 chapter 2 Reading A P81) This may help children like Kelly, but in the south there is still some way to go. The Structural Adjustment Programmes (SAPS) enables countries to borrow money from the World Bank. However there are conditions that favour the north, the result of which can mean children's experiences of poverty, especially in poor areas of the south, are increased causing detrimental damage to children's all round development. Although SAPS is designed to create economic growth, the reality is very different as some governments struggle to get their economy going. Poverty can have a direct influence on ill health as the two reinforce children's experiences of life and therefore also needs to be understood at all levels. ...read more.

What has been understood locally and globally in light of the many challenges facing such organisations like UNICEF, and the UNCRC, is disappointing as poverty continues to seep into even the wealthiest of countries and ill health persistently threatens children's survival. The reasons for this are complex, as my examples have highlighted through examples, as there are so many factors that can hinder any progress being made that will improve the experiences children have of these two adversities. What is apparent, are those living in the south experience poverty and ill health on a far bigger scale than the north, highlighting how the targets set internationally to tackle them will be hard to achieve locally. For although millions of lives have been saved globally from diseases like HIV, my example in South Africa reveals the flaws that exist which restrict its children from being among the success stories. As UNICEF has pointed out, local interventions already seen will never stop the death of children from preventable and treatable diseases without acknowledging the differences between cultures and improving health by including a more comprehensive package that includes improving the conditions relating to the absolute poverty these children experience. With statistics that reveal 80% of the world's population live in the south, yet only own a quarter of the wealth according to UNICEF Human Development Report in 1997 (Book 4 chapter 2) highlights the need to gain a better understanding of these two issues, both locally and globally together if we are ever to succeed in securing children's rights as laid out under the UNCRC and indeed for those children not protected by its laws. ...read more.