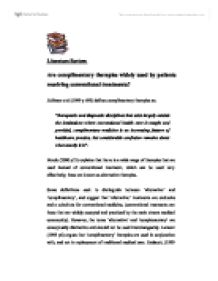 Literature Review: Are complimentary therapies widely used by patients receiving conventional treatments? Zollman et al (1999 p 693) defines complimentary therapies as: "therapeutic and diagnostic disciplines that exist largely outside the institutions where conventional health care is taught and provided, complimentary medicine is an increasing feature of healthcare practice, but considerable confusion remains about what exactly it is". Moule (2000 p75) explains that there is a wide range of therapies that are used instead of conventional treatment, which can be used very effectively; these are known as alternative therapies. Some definitions seek to distinguish between 'alternative' and 'complimentary', and suggest that 'alternative' treatments are exclusive and a substitute for conventional medicine, (conventional treatments are those that are widely accepted and practiced by the main stream medical community). However, the terms 'alternative' and 'complementary' are conceptually distinctive and should not be used interchangeably. Lamont (1993 p6) argues that 'complimentary' therapies are used in conjunction with, and not in replacement of traditional medical care. Endacott, (1999 p115) suggests that practitioners of complimentary medicine see the symptoms as the body's response to illness rather than the disease itself. The fundamental philosophy of complimentary therapy is to use the gentlest approach, to avoid dangerous and traumatic procedures, and to treat the patient 'holistically'. Jones, (1998 p63) views the patient as a 'whole' individual, composed of body, mind, and emotions, and sees complimentary therapies as promoting healing focusing on the strength of the health of an individual, rather than destroying the cause of the disease. In his book Holistic Living, Patric Pietroni describes the concept of holism as "essentially about an approach each one of us can use to help us understand ourselves and our place in the world in which we live. From this deeper understanding, we can begin to make informal choices about our health and the way we conduct our lives". Holistic health, then, represents an approach to all aspects of life and has implications for each one of us. ...read more.

The results showed that twenty one per cent had used a complimentary medicine or therapy in the last year - double the number found to be using them in a similar survey six years ago. The majority of the people surveyed said the main reason they used complementary and alternative medicine was because it worked for them, but other reasons given includes that it was relaxing and that it helped to prevent illness. One in ten people were referred to an alternative therapist by their doctor, but an equal number referred themselves because they said they did not believe in conventional medicine. The poll also revealed that the shift towards alternative therapies might be saving the NHS money. People taking part in the survey spent on average �13.60 a month on alternatives and those aged between 18 and 24 spent an average of �18.60 - totaling �223 a year. http://news.bbc.co.uk/1/hi/health/426432.stm A recent small-scale study has been carried out by staff at the Breast Care Unit at Huddersfield Royal Infirmary into the value of using aromatherapy massage to relieve lymphoedema (lymph accumulates in the subcutaneous tissue, causing the effected limb to become swollen and tender) the study involved women at various stages of recovery. The nurses used the manual lymph drainage technique with aromatherapy to relieve lymph drainage and soften the affected tissues. They gave at least six sessions of massage with Lavender oil lasting 20-30 minutes. The patients were then asked how they felt after the treatments. All the patients reported some benefit in terms of relaxation; some also said that there was some alleviation of pain, reduction in swelling and improved self-esteem. (Cited in Journal of International Therapists issue 9 p 11). A research study conducted at the Marie Curie Center in Liverpool, was set up to assess the effects of aromatherapy massage on cancer patients receiving palliative care. Patients received three full body massages over a three-week period, with or without the essential oil Roman chamomile. ...read more.

It seems that NHS primary care groups and health authorities are reluctant to spend significant sums of money on con-conventional approaches without evidence of cost-effectiveness. Nevertheless, because few complementary and alternative therapies are available on the NHS, there is little or no incentive to divert limited funds into research. The tragedy is that, even in a priority area like cancer, there are well-founded suggestions those additional simple interventions such as aromatherapy and massage could save thousands of pounds in medication costs and improve the quality of life of many patients. HRH The Prince of Wales and indeed the whole royal family are great believers of holistic medicine. The Prince is quoted as saying 'I am personally convinced that many people could benefit from complimentary medicine'. (cited in Jones 1998 p 66). HRH The Prince of Wales spoke at St James's Palace in 1997, in celebration of the centenary of the King's Fund, of which he is President: 'Many studies into complementary and alternative medicine are carried out abroad, in the US, the government's National Center for Complimentary and Alternative Medicine (NCCAM) has a research budget of $68 million (dollars) a year. In the UK figures from the Department of Complementary Medicine at the University of Exeter show that less than 8p out of �100 spent of NHS funds for medical research was spent on complimentary medicine. In 1998 the Medical Research Council spent no money on it at all, and in 1999 only 0.05% of the total research budget of the UK medical charities went to this area'. The Prince suggested that a National strategy for alternative medicine, with new funding for the Foundation for Integrated Medicine, which could provide a to coordinate this strategy, allocate funding, provide a networking resource, train researchers, disseminate information and monitor research development. He also suggested that serious funding is needed for bursaries, fellowships, research centers, and support for 'fledgling' researchers. When the future King of England speaks out and encourages the modern NHS to embrace alternative and complementary medicine, people sit up and take notice. http://www.princeofwales.gov.uk/speeches/health_301222000. ...read more.