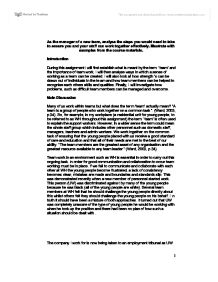 As the manager of a new team, analyse the steps you would need to take to ensure you and your staff can work together effectively. Illustrate with examples from the course materials.

As the manager of a new team, analyse the steps you would need to take to ensure you and your staff can work together effectively. Illustrate with examples from the course materials.

During this assignment I will first establish what is meant by the term ’team’ and the importance of team work. I will then analyse ways in which a sense of working as a team can be created. I will also look at how strength’s can be drawn out of individuals in the team and how team members can be helped to recognise each others skills and qualities. Finally, I will investigate how problems, such as difficult team members can be managed and overcome.

Many of us work within teams but what does the term ‘team’ actually mean? “A team is a group of people who work together on a common task”. (Ward, 2003, p.34). So, for example, in my workplace (a residential unit for young people, to be referred to as WH throughout this assignment) the term ‘team’ is often used to explain the support workers. However, in a wider sense the term could mean the whole staff group which includes other personnel such as domestic staff, managers, teachers and admin workers. We work together on the common task of ensuring that the young people placed with us receive a good standard of care and education and that all of their needs are met to the best of our ability. “The team members are the greatest asset of any organisation and the greatest resource available to any team leader” (Ward, 2003, p.34).

Team work in an environment such as WH is essential in order to carry out this ongoing task. In order for good communication and collaboration to occur team working must be in place. If we fail to communicate and collaborate with each other at WH the young people become frustrated, a lack of consistency becomes clear, mistakes are made and boundaries and standards slip. This was demonstrated recently when a new member of personnel started work. This person (UW) was discriminated against by many of the young people because he was black (all of the young people are white). Several team members at WH felt that he should challenge the young people directly about this whilst others felt they should challenge the young people on his behalf. In truth it should have been a mixture of both approaches. It turned out that UW was completely unaware of the type of young people he would be working with when he took up the position and there had been no plan of how such a situation should be dealt with.

The company I work for is now being taken to an employment tribunal as UW felt compelled to leave the company after just 11 days of work. The situation could have been so much different had the team sat down together (even if it had just been the management team) and decided what skills the person actually needed before employing them (it was a newly created post). There should have also been an agreement between the team on strategies which could be used to deal with discriminatory behaviour. We fully expected the member of staff to be discriminated against by the young people as one of them already has a criminal conviction for a racially aggravated public order offence. Sadly, the young people were possibly left with the impression that if they discriminate against someone they will ‘get rid of them’ and they were confused by the lack of consistency in supporting UW.

Having looked at what is meant by the term ‘team’ and why team work is important we must now look at how we can create a sense of working as a team - especially a new team. I am a firm believer in team work exercises and I have real faith in them when they take place outside of the working environment. One example of how this can be done is by using a charity fundraising attempt. A friend of mine (SO) works as part of a physiotherapy team based in a hospital. It is a new team and the team members mainly come from different parts of the country. In order for them to get to know each other better - one of the members, having been affected by cancer herself, suggested that the team did the ‘Race for Life’ in aid of Cancer Research UK. They set up a training programme and helped motivate each other - drawn together by the good cause. After completing the run SO reported an improved sense of being part of the team and a greater knowledge of her colleagues. They keep photos of the event in their office in order to remember the day. Back at WH however, the story is very different. The team here only get together on work based projects and it is usually down to one or two members to get the job done, whilst the others are happy to bathe in the success of the final outcome. On our few ‘staff night’s out’ we always follow the lead of the youngest member of the team who always suggests nightclubbing - not the best environment for team building! With half of the staff being over 35 this is not always a popular choice anyway. It also fosters a ‘split’ in the team between the 2 or 3 youngest members and all of the others.

It has to be acknowledged here though that individuals can get ‘lost’ within ‘teams’ and must have their individual strengths acknowledged and used if the are to fulfil their potential. This is evident during Julie’s first period in charge at Wellbridge (K303 CD Rom Scenarios 2,3 and 4), Julie at first overlooks skills that both the receptionist and the secretary have and it even seems as though the two of them are not really considered by Julie as being part of ’the team’. However, as recommended by Gloria, Julie soon realises that everyone is working towards the common task at Wellbridge and that both the receptionist and the secretary have really useful skills (often over and above what would be expected in their posts). When allocating work to the team it is important that the team leader takes those strengths into account. However, problems can arise when those with specific strengths are given a heavy workload in comparison to others or one which they have difficulty managing. Team leaders also need to acknowledge that “…. team members may not always agree about their respective strengths and weaknesses” (Ward, 2003, p.34).

If problems occur in teams and with team work we can often look closer at the individuals in it and find a difficult team member “It is not uncommon in teams for there to be one person who appears to be the most difficult one to manage”. (Ward, 2003, p.34). An article called ‘The Human Factor (Blair, 2005) looks at how difficult members can be managed and talks of five main stages. In the first stage it suggests that the manager should monitor and  the problem whilst seeking explanations for the individual’s behaviour. When moving onto the second stage the writer suggests that the individual should be encouraged to find his or her own solution to the problem. Stage three looks into the behaviour and analysis of it. Here patterns of behaviour could be identified and broken. Stage four looks at how manager’s can implement consequences of behaviour (such as routine change, policy change or breaking the pattern) and talks about motivational techniques. Stage five, being the final stage is to go over the whole problem and monitor how it was solved and the results over a set period. If the plan failed the stages should be gone through again.

In the course’s CD Rom (K303 Course Materials CD-Rom ‘Managing Care at Wellbridge. Scenario‘s one, two and three) Julie is made aware of a difficult team member called Mark Spitz. Mark has an absence problem which is a recent problem and he is reported to be good at his job otherwise. At first Julie suggests not working through any of the above stages at all but soon changes her mind after listening to Gloria (who suggests ways of getting Mark to explain and change his behaviour) and Sian (stage one). Although nervous, Julie arranges a meeting with Mark and seeks advice from Gloria on how to approach the meeting. At the meeting more of the above stages are worked

through, Mark is open about his recent personal problems and explains that he remains vulnerable about a past complaint as he had received no personal support following the outcome (where was his support form his team, and more importantly his team leader? There has definatly been a break down in communication here). It is agreed that Mark’s rota’s will be changed so that he can attend a support group and that he should have regular talks with Sian. A 3 month review should then take place (stage 5)

Throughout this assignment I have been reminded how important communication and collaboration are. This is evident through watching Julie’s problems at wellbridge and during my own work at WH. A team that does not collaborate and communicate is a team that does not function very well, therefore it does not meet the demands of its common task very well either. In more detail, it is evident that a lack of these skills can result in non-belief in the importance of team work, no sense of being part of a team, strengths not being brought out of people and a lack of recognition of others strengths. All of these aspects can promote team members becoming difficult.

It is therefore clear that a strong, professional person with excellent communication and people skills is needed to lead a team. That person must learn to lead by example and must take time to stand back and watch their team work whilst monitoring their communication, collaboration, interpersonal interactions and difficulties. It is also vital that the team leader encourages the team to begin by working through their problems together.

My lasting thoughts are that teamwork, especially in the challenging world of social care, is vital. However difficult it may be we need to concentrate more on team work and being part of our teams, this way our common task will be easier to work on and to manage.