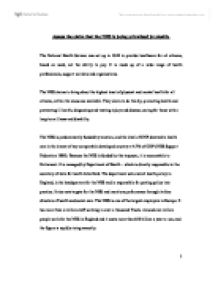 Assess the claim that the NHS is being privatised by stealth.

Assess the claim that the NHS is being privatised by stealth. The National Health Service was set up in 1948 to provide healthcare for all citizens, based on need, not the ability to pay. It is made up of a wide range of health professionals, support workers and organisations. The NHS claims to bring about the highest level of physical and mental health for all citizens, within the resources available. They claim to do this by, promoting health and preventing ill health; diagnosing and treating injury and disease; caring for those with a long-term illness and disability. The NHS is predominantly funded by taxation, and the level of GNP devoted to health care is the lowest of any comparable developed country at 6.7% of GDP (NHS Support Federation 1999). Because the NHS is funded by the taxpayer, it is accountable to Parliament. It is managed by Department of Health - which is directly responsible to the secretary of state for health John Reid. The department sets overall health policy in England, is the headquarters for the NHS and is responsible for putting policy into practice. It also sets targets for the NHS and monitors performance through its four directors of health and social care. The NHS is one of the largest employers in Europe. ...read more.

Today, the NHS has been described as a fiasco with shortages of skilled workers, low morale, long queues for services, crumbling facilities and corrupt practises. One 'solution' to this 'problem' may be to privatise or part-privatise the NHS. But there is great objection in the British population, because for many years they have enjoyed a free health care system, but the question they should ask is, at what costs? And, can the British government continue to use taxpayer money on a service that isn't up to the standards of other EU countries? The demand for better service has been voiced in opinion polls, the media and ministers, so the privatisation of the NHS seems a sound solution. Many people in Britain object, politically, to the privatisation of the NHS because they believe that they will be at loss. Britons need to know exactly what privatisation means, and because it would be such a radical change, they are naturally afraid. It would mean no waiting lists, queuing is a feature of the lack of a price mechanism in state ownership, it disappeared very quickly when BT was privatised. Secondly there would be more efficient management, none of the bureaucracy that has arisen with government cost cutting attempts. Thirdly there would be better incentives, resulting in lower costs and most people being able to pocket much of their tax cuts and not have to spend it too much of it on health insurance. ...read more.

The state will pay the cost of NHS ops and up to 70 per cent of private treatment. Patients would pay the difference out of their own money, or from private "top-up" health insurance. Tories believe the move would free up hospitals to deliver faster treatment for poorer families. Shadow Health Secretary Liam Fox said, "For the first time, the patient will be given the freedom of choice." Anyone who needs hospital treatment will be able to select where and when to have it. Charges for all procedures will be set out in a price tariff. This "Health Entitlement Licence" is designed to reduce abuse of the NHS by asylum seekers. Immigration officials would investigate anyone unable to produce one. From examining current New Labour policies, such as foundation hospitals and new Tory policy, it is apparent that they are both driving towards a better system of health care, which they believe involves some form of stealth. But this stealth is beneficial for everyone, because it means the government can assess what works, and what doesn't. It also means the public has time to become accustomed with an improved health service. Some schemes will prove more popular than others, and not all transformed practices will work, but it does pave the way for a better National Health Service. It means that the service will become accountable to the people, taxes can be spent on priorities such as education. ...read more.