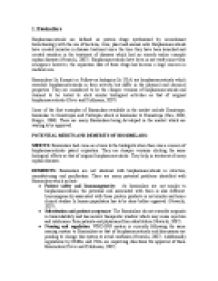 * Substitution and patient acceptance: The Biosimilars do not resemble originals in bioavailability and has narrow therapeutic window which may cause rejection and intolerance from patients and physicians from substitution (Nowicki, 2007). * Naming and regulation: WHO-INN system is currently following the same naming system to Biosimilars as that of biopharmaceuticals and discussions are pending to change this system to avoid confusion (Nowicki, 2007). Additionally regulations by EMEA and FDA are improving directions for approval of these Biosimilars (Covic and Kuhlmann, 2007). * Labeling: Since the safety instructions and composition is different for both, labeling instructions should differ (Nowicki, 2007). 2. Tier-4 Drugs: Tier 4 drugs are defined as those drugs employed in treatment of cancer and other chronic disorders, which could prove fatal. Examples of this type include Avastin (Bevacizumab) and Herceptin (trastuzumab). ...read more.

Both of these drugs are treated the same way, which decreases cost effectiveness (Thomas et al., 2008). INCREASING COSTS OF RECOMBINANT DRUGS: The use and value of recombinant drugs is increasing day to day, and health agencies in UK and USA have responded tremendously to this. Recombinant drugs and their variants are becoming extremely expensive and has become a challenge to both the governments.Keeping pace with the growing technology and health care needs has become a challenge to both the governments (Peter and Philips, 2007). To address the situation, US government has strategically improved its health care plans in investing funds for research and development organizations for inventing follow on biologicals. This approach would be cost effective and rightly address the problem. Apart from initial funding, US and UK governments are planning to support more in further research of their improvement (Peter and Philips, 2007). Another significant development by medicare is pay for performance to increase health care standards where money is paid according to performance shown (Alan et al., 2008). ...read more.