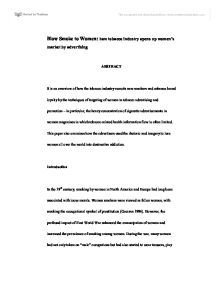 Blow Smoke to Women: how tobacco industry opens up women's market by advertising.

Blow Smoke to Women: how tobacco industry opens up women's market by advertising ABSTRACT It is an overview of how the tobacco industry recruits new smokers and enhance brand loyalty by the techniques of targeting of women in tobacco advertising and promotion - in particular, the heavy concentration of cigarette advertisements in women magazines in which tobacco-related health information flow is often limited. This paper also examines how the advertisers used the rhetoric and imagery to lure women all over the world into destructive addiction. Introduction In the 19th century, smoking by women in North America and Europe had long been associated with loose morals. Women smokers were viewed as fallen women, with smoking the occupational symbol of prostitution (Greaves 1996). However, the profound impact of First World War enhanced the emancipation of women and increased the prevalence of smoking among women. During the war, many women had not only taken on "male" occupations but had also started to wear trousers, play sports, cut their hair, and smoke (Waldron 1991). Subsequently, attitudes towards women smoking began to change, and more and more women started to use the cigarette as a weapon to challenge traditional ideas about female behaviours. The tobacco companies seized this opportunity in the 1920s and 1930s to exploit ideas of liberation, power and other important values for women to recruit them to the cigarettes market. ...read more.

While supposedly describing the versions of the cigarettes, these copy lines also reinforce the female perception of slimness. Some common themes are used in cigarette advertisements to portray smoking as the habit of attractive women. For example, advertisements often feature young attractive females smoking in the company of laughing friends, with an attractive man usually in a romantic setting, or simply proclaiming her sexual allure. Tobacco companies tend to hire young models in their advertisements because of their attractiveness. From a survey conducted in United States (Denman et. al 1992), there is a negative linear relationship between perceived cigarette model age and perceived cigarette model attractiveness. Older models are viewed as less attractive than younger models. Advertising is also used to reduce women's fear of the health risks from smoking by presenting information on nicotine and tar content or by using positive images in the advertisement. Models engaged in exercise or pictures of white capped mountains against a background of clear blue sky are very commonplace. "My pleasure!" states a Virginia Slims ad, featuring an athletic blond woman playing boxing. Sponsorship of sports events such as the Virginia Slims Tennis championships can promote the positive, healthy image of the tobacco company besides of getting international coverage. --Psychosocial Aspects Another most common theme other than physiological factors is that cigarette smoking is both a passport to and a symbol of a woman's emancipation, independence and success. ...read more.

Conclusion Before the 20th century, people have never imagined how such a stigmatized behavior as female smoking would be transformed by the sophisticated marketing from a symbol of prostitution, into a socially acceptable and desirable practice. The change of the cultural meaning of smoking makes the habit so commonplace to women. It is a disgrace to see that women are being convinced by the advertising that using a product deadly to themselves and harmful to their children is fashionable and glamorous. The tobacco makers not only run their business in their home countries, but also beginning digging to the world where women smoking rate is low to globalize their business and maximize the profit. The challenge facing us is how to turn down the fatal attraction in which carefully crafted marketing methods are used. One critic put it in this way, The latest Virginia Slims Campaign asks women to "find their voice". Yes, indeed, we must find our voice, to confront and conquer tobacco. Many of us may literally lose our voices, permanently, if we do not. (Healton 2000:304) Even though the anti tobacco organizations continue to counteract the business of the tobacco companies, the companies keep launching advertising campaigns with clever marketing techniques to challenge those who challenge them. It seems likely that this conflict will intensify across the globe. The health and the well-being of women will rest on the outcome of this global opium war. ...read more.