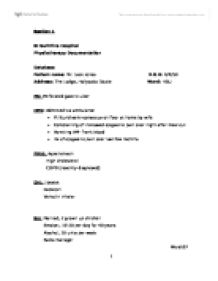 Ausc: Breath Sound (BS) throughout but ↓ L base.  No added sounds.

Mr Jones shows signs of hypoxemia, with PO2 of 10.2kpa and SaO2 94%.  Ventilation is commonly affected by the reduced lung volume. In turn, gas exchange properties between oxygen and blood are diminished, as the oxygen required is hindered. This creates V/Q mismatch resulting in hypoxemia (Roussos & Koutsoukou 2003).

Evidence suggests superficial secretions due to reported ‘rattly sounds’ by nursing staff. They are concerned as patient is finding it difficult to cough, which is to be suspected, as pain from the abdominal incision will reduce voluntary cough. However, suppression of cough could lead to the accumulation of secretions increasing risk of infection (Dilworth & Poundsford 1991).

Mr. Jones shows signs of unstable CVS. He is tachycardic with HR of 105 and low CVP of 3. This is treated by the medical staff with the use of appropriate medication.

Liaise with nursing staff re-CVS, prior to positioning. Position patient in right high side lying, making sure he is fully supported. Turning from supine to side lying can clear atelectasis, enhancing gas exchange. This will increase V/Q mismatch and help clear secretions (Stiller 2000). Caution must be taken when handling patient with regard to the wound incision. Alterations to high sitting would be advisable to reduce risk of developing pressure sores (Thomas 2006).

ACBT would be indicated with all three components used. BC will help reduce his breathlessness. TEE would be carried out as able, to increase expansion. Holds would be avoided due to breathlessness. FET would be included, as huffing to low lung volumes helps to clear the secretions from peripheral airways (Bhowmik et al, 2008). Cycle would include: BC-BC-BC-TEE-BC-BC-BC-FET-BC-BC-BC (twice)

Supported cough would be taught, to relieve pain and fear when coughing. It will coincide with the increase in airflow following the new positioning and will assist in the mobilization and clearance of secretions (Pyror 1999).

High side lying and TEE will increase left lung expansion and enhance gas exchange, improving V/Q matching. Collapsed air spaces will inflate with the use of TEE by enabling the air to behind mucus plugs, assisting in removal to central airways (Stiller 2000).  Position change will help prevent atelectasis appearing in the dependent zones, in addition to pressure area management (Thomas 2006). The supported cough technique will increase confidence to cough.

Inform N/S of position of the patient, and to monitor hemodynamic status post treatment. To encourage patient with ACBT, as may be reluctant. Review in 2hours to check position and ACBT.

Mr. Jones is on the brink of acute respiratory failure type 2. His SaO2 are critically low and ABGs show concern for respiratory acidosis; he is both hypercapnic as his PCO2 is 6.8kPA and hypoxemic as PO2 is 8kPa, with Ph 7.33 (Roussos n Kaoutsoukou 2003). Use of accessory neck muscles show alterations in the respiratory pump and suggest excess work of breathing as he also has tachypneoa.

There are clear signs of growing infection. He is pyretic and WCC is increasing. He is retaining sputum, reasoning to believe it is thick, viscous and of purulent nature, suggesting bacterial infection (Soler 2006). Both urine and wound samples are negative ruling out UTI or sepsis, giving indication of chest infection.

High concentrations of urea and creatinine, as well as having olguria show that he is on brink of acute renal failure.

Suctioning would be considered to clear secretions from central airways. It would also help to stimulate a cough (Stiller 2000). CVS should be monitored throughout.

Positioning would prioritise right side lying to increase expansion and ventilation. Gravity will assist postural drainage and movement of secretions to central airways, shown to be more effective than cough (Pryor 1999). Alternate to high sitting if stable

Continue with ACBT from day one, as able. Encourage independent expectoration.

Positioning should increase expansion and ventilation of L lung, improve V/Q matching and reduce use of accessory muscles. Alternation should help with pressure management.

Following incubation, Mr. Jones appears to be resolving slightly. ABGs show compensatory respiratory acidosis with the decrease of CO2 and increase of bicarbonate and ph (Yaseen 2007).

Evidence shows he has pneumonia in left base. Pneumonia caused by

(Tidy 2008) which is seen in the chest x-ray B, highlighting consolidation. He has increase WCC, is pyretic and producing purulent secretions indicating chest infection. Bronchial breathing suggests consolidation, a clinical feature of pneumonia (Hough 2001). Consolidation also reduces ventilation. This is verified by his hypoxemia, suggesting V/Q mismatching.

Sputum retention is ongoing in the left base, evident from palpable secretions throughout and crepes on auscultation.

Concentrations of urea and creatinine increased over night with reduced fluid output.  Mr. Jones has started a course of dialysis displaying concern by M/S of impaired renal function.

He is at risk of DVT and de-conditioning. His illness has prevented mobilisation which is paramount in order to reframe from developing further problems.

Liaise with nursing staff re CVS stability, and initiation of dialysis. Liaise with medical staff about reducing sedation and allowing spontaneous breathing with pressure support ventilation.

Manual hyperinflation (MH) would be employed to assist the removal of secretions from peripheral airways, re-expand areas of atelectasis and improve oxygen saturation (Deheny 1999). CVS would be monitored as hemodynamic changes can occur (Stiller 2000).

Continue suctioning to clear secretions from central airways and prevent airway obstruction in the ETT (Stiller 2000). Liaise with medial staff about use of saline to increase clearance during suctioning.

He is to continue in high right side lying to improve left expansion and V/Q matching. Alternating position to prevent sores and further de-conditioning would be advised.

As he is ventilated, ACBT would not be suitable.

Pulmonary rehabilitation (PR) is considered central to the management of symptomatic COPD (Cazzola at al 2007). It is an on going process that focuses on restoration of the individual to his or her fullest physical, mental and social capacity considered essential throughout the life management of patients with the respiratory disease. (Morgan 2001). PR would also provide patients with self-management strategies which reduce subsequent health utilization (Cazzola 2007).

Rehabilitation would begin almost immediately with gentle passive movement of upper and lower limbs to be initiated if his condition and CVS stability improved. This would help to prevent joint stiffness and muscle weakness after prolonged bed rest, also decreasing of risk of DVT (Stiller 2009). Depending on sedation status he could incorporate active-assisted/active limb exercises by end of day five.

It would be hoped to progress mobilising as soon as possible. Mobilisation that involves the erect position optimizes oxygen transport, lung volume and reduces effects of immobility (Stiller 2009). Progress would depend on patient ability. Confidence and trust in the therapist by Mr. Jones is vital to achieve.

The treatment should be based on achieving the functional goals set for the particular patient. They should be constantly modified and re-evaluated with progression. The main focus would be placed on functional abilities, and try to resolve functional restrictions that he may have.

By end of day six/seven, an initial goal for Mr. Jones could be to mobilise from bed to chair with assistance, depending on his status. Progression would depend on capability to achieve this goal, which could be modified to mobilising to the toilet. Prior to discharge, a more long term, realistic goal

would aim for Mr. Jones to be mobilising independently around the ward 5 times a day.

Rehabilitation requires equal involvement from members of the MDT. A respiratory nurse from the ward would offer appropriate advice and support after his recent diagnosis of COPD. Early education about smoking cessation would be paramount as it is the only intervention that reduces the risk of developing COPD and slows progression (Tonnesen et al, 2007). Smoking is also attributed to the development of perforated gastric ulcers, of which was reason for his admission initially (Sevanes 2000). An occupational therapist would assess Mr. Jones incase he required any home adaptations or aids to facilitate him.

Once discharged, his physician would refer him to an outpatient pulmonary class. Classes would involve 2-3 weekly visits for 6-12 weeks, with patients of similar conditions (Morgan 2001). PR sessions primarily involve exercise, relaxation, finished with education session (Dudley group of hospitals 2007). The exercise component is organised by a physiotherapist. Elements include respiratory, upper body and lower body muscle training (Bendstrup 1997). It would increase exercise tolerance and reduce muscle de-conditioning due to restriction of activity (Cazzola 2007). Patients will be given individually tailored programmes and be expected to carry on exercise routines at home (Dudley group of hospitals 2007).

A period of relaxation would be incorporated at the end of exercise and to encourage into daily routine. It is important for patients like Mr. Jones to be able to relax, as it will help him during acute attacks of his disease. Breathing control and relaxation techniques are taught (Dudley).

The education component would incorporate talks from a variety of different professions each week. Many topics would be discussed and questions resolved (Bendstrup 1997). A dietician would educate on nutrition, as             Word:566

malnutrition is common in COPD (Ezzel 2000). A respiratory nurse would educate on the management of oxygen, medication and smoking cessation (Hough 2001). A psychologist would discuss the psychological issues and problems associated with the individual lung diseases (Bendstrup 1997). Psychiatric and psychological disorders are at least three times higher in COPD patients compared to the general population (Laurin 2007). A physiotherapist would educate on the importance of exercise and why one should increase exercise tolerance. A physician would discuss medical issues related to the diseases. They would incorporate smoking cessation into their discussion, whilst an OT would also offer practical alternatives to smoking (Bendstrup 1997). These sessions would help reduce patients fear and uncertainty whilst increasing confidence overall. Family and friends of the patients are generally welcome. It allows them to understand the hardship of rehabilitation and the importance of support at home.

ADL (Bendstrup 1997). These outcome measures allow specific and realistic goals to be established, between the therapist and patient. Initial short term goals could be aimed at increasing 2-3levels of the ISWT or increase distance of 40metres within 2 weeks of PR. It is important that patients see improvement as it will motivate them more.  Establishing activities which Mr. Jones enjoys will give him drive for determination in meeting goals set.

Pulmonary rehabilitation should be integral to the management of people with respiratory disability. It is important the patient realises rehabilitation does not reverse lung damage but it modifies the disability that derives from it (Morgan 2001).

STILLER, K. PHILLIPS, A. C. LAMBERT, P. 2004. The safety of mobilisation and its effect on hemodynamic and respiratory status of intensive care patients. Physiotherapy Theory and Practice, 20 pp.175-185