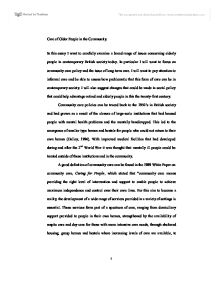 Care of Older People in the Community.

Care of Older People in the Community. In this essay I want to carefully examine a broad range of issues concerning elderly people in contemporary British society today. In particular I will want to focus on community care policy and the issue of long-term care. I will want to pay attention to informal care and be able to assess how problematic that this form of care can be in contemporary society. I will also suggest changes that could be made in social policy that could help advantage retired and elderly people in this the twenty-first century. Community care policies can be traced back to the 1950's in British society and had grown as a result of the closure of large-scale institutions that had housed people with mental health problems and the mentally handicapped. This led to the emergence of smaller type homes and hostels for people who could not return to their own homes (Dalley, 1996). With improved medical facilities that had developed during and after the 2nd World War it was thought that mentally ill people could be treated outside of these institutions and in the community. A good definition of community care can be found in the 1989 White Paper on community care, Caring for People, which stated that "community care means providing the right level of intervention and support to enable people to achieve maximum independence and control over their own lives. ...read more.

However the Government, does not believe that making personal care universally free is the best use of these resources" (cited http://www.longtermcare.co.uk/). Another recommendation put forward by the Commission which was "the Government should ascertain precisely how much money goes to supporting older people in residential settings and in people's homes". The Government's response to this was "any division between acute and long term health care would be somewhat arbitrary. The Government believes that it is more important to get the right incentives in the system to promote older people's independence and to provide care closer to home. This is what the proposals in the NHS Plan on intermediate care and associated services aim to do" (cited http://www.longtermcare.co.uk/). I think if the Government was able to ascertain how much money goes into supporting older people in residential settings and people's homes the Government would have a clear idea of how to budget their finances more accurately towards elderly people. Thus have an idea of how to fund long-term care more efficiently. On the key financial issues critics could argue that the proposals offer little comfort and do not fundamentally change the position. "The free nursing care is better than nothing but in real terms its value will be of limited benefit to the majority of individuals who will still have to use their savings and property to meet their care costs" (cited http://www.careaware.co.uk/news.html). ...read more.

We could also say that Western ideas has shaped the third way approach e.g. the passing Clinton administration which had adopted many third way policies. We can place the third way approach to the centre left of the political spectrum. However, the third way approach to community care and in particular the issue of charging elderly people for long-term care is proving undesirable among British people. As is stated in British Social Attitudes "people are in the main still keen to retain the provisory role of the state when it comes to key areas of welfare provision, this includes paying for the institutional care of elderly people for which greater provision was recently recommended by a recent Royal Commission report (Royal Commission, 1999), but rejected by the government". If we look at capitalism we can make the assumption that capitalism does not benefit the retired or elderly frail in society. Once we reach the age of retirement we are looked upon as dependent on the state and family for social support as people at this stage in life are stereotyped as being incapable of work. These are the negative stereotypes that many retired people face in our modern society today. We could argue here that capitalism has no role for the retired and elderly in society and more to the point that it actually strips older people of their many roles that they once had in society. Many of the government's social policies tend to reinforce this in contemporary society. ?? ?? ?? ?? 1 ...read more.