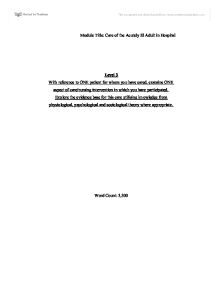 Care of the acutely ill

However, respiratory depression according to Ko, Goldstien and VanDenKerkhof (2003) is a very rare side effect but patients on opioid medication should always be closely monitored for such effects. This is another reason for completing the vital signs over the time period stated above, according to local policy (2006) these should be completed by a member of staff competent in the use of IVPCA. A failure to notice these significant changes could be fatal to the patient as commented upon in the report by the National Patient Safety Agency (2008). It was observed that post surgically Vikki had not used much IVPCA when asked about it she replied she was having difficulty in staying awake once she pressed the button as she went straight to sleep then she only awoke again once she was in pain. This mild sedation of Vikki was noted by the health professional staff as Vikki responded to voice when her pain was assessed and it was concluded at the time that it was satisfactory. However, the morphine was not really appropriate to Vikki's needs as it was not controlling her pain continuously. Within the elderly systemic analgesia works quickly and this could explain the rate at which Vikki fell asleep after pressing the button for a bolus infusion (Kneale and Davis, 2005). A small amount of morphine is usually prescribed initially in elderly patients postoperatively as they are more susceptible to the adverse effects (Wilder-Smith, 2004), this in itself can cause the problem of poorly controlled pain. This would be another reason for LIA to be used on a patient such as Vikki. When this was noted by the nurse Vikki should have been referred to the acute pain team. However, she was not this according to the document produced by the National Health Service Quality Improvement for Scotland (2004) was bad practice as there was an obvious need for Vikki to be referred to alleviate her pain and control her sedation levels. ...read more.

However, on the pain assessment criteria and monitoring sheet gender is not accounted for. To conclude, the assignment has analysed the management of postoperative pain in an acutely ill patient. The nursing practice has been evaluated in relation to the best available evidence and the physiological rationale has been discussed for the care interventions. There are many different theories that relate to postoperative pain management these often conflict with one another and it is possibly necessary for more research to be completed in this field in relation to a holistic approach incorporating physiological, psychological and sociological concepts. Yet every patient is an individual and will experience these pain sensations differently and pain must be treated as an individual experience for every patient. It is believed that Vikki had poorly controlled pain and the management of which was not sufficient to her needs. Unfortunately this is often the case for individuals postoperatively and further research and guidance needs to be produced to allow a conclusive effective procedure in the case of postoperative pain management. Taking into account all of the individual variables and physiological, psychological and sociological theory. It can be concluded that Vikki would have had better postoperative pain control if LIA had been used. It is possible that music therapy would be beneficial to patients experiencing postoperative pain. To develop current practice more research is needed into the effects of a specially designed music therapy audio tape on postoperative pain control. This could alleviate the financial difficulties faced by having a one-on-one session with a registered music therapist. Effective communication and knowledge are imperative to effective postoperative pain management. In Vikki's case if the nurse had more knowledge about the alternative analgesia and had possibly attended a study day Vikki could have received better postoperative pain management. Therefore, adequate time, good clinical observation skills and effective communication should always be used in a pain assessment and greater knowledge to the alternative analgesics will ensure good future nursing practice. ...read more.