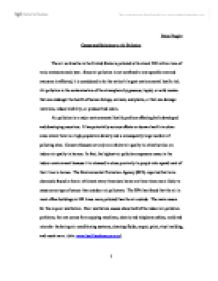 Causes and Solutions to Air Pollution.

Diana Faught Causes and Solutions to Air Pollution The air we breathe in the United States is polluted with almost 200 million tons of toxic emissions each year. Since air pollution is not confined to one specific area and everyone is affected, it is considered to be the nation's largest environmental health risk. Air pollution is the contamination of the atmosphere by gaseous, liquid, or solid wastes that can endanger the health of human beings, animals, and plants, or that can damage materials, reduce visibility, or produce bad odors. Air pollution is a major environmental health problem affecting both developed and developing countries. It has potentially serious effects on human health in urban areas where there is a high population density and a consequently large number of polluting sites. Concern focuses not only on ambient air quality in cities but also on indoor air quality in homes. In fact, the highest air pollution exposures occur in the indoor environment because it is released in close proximity to people who spend most of their time in homes. The Environmental Protection Agency (EPA) reported that toxic chemicals found in the air of almost every American home are three times more likely to cause some type of cancer than outdoor air pollutants. ...read more.

Smaller particles usually come from combustion of fossil fuels. The largest source of fine particles is coal-fired power plants and auto diesel exhaust. Other small particles include soot from vehicle exhaust, fine sulfate, and nitrate aerosols. The health effects of particulates depend on the size of the particle. Small particles, such as those from fossil fuel combustion, are likely to be most dangerous because they can be inhaled deeply into the lungs, settling in areas where the body cannot remove them, causing increased respiratory disease and lung damage. Sulfur Dioxide (SO2) is an odorless gas at low concentrations, but can have a very strong smell at high concentrations. SO2 is a gas produced by burning coal, mainly in power plants. Some industrial processes, such as production of paper and smelting of metals, produce sulfur dioxide. Sulfur Dioxide is a major contributor to smog and acid rain. It can harm vegetation and metals and can cause lung problems, including breathing problems and permanent damage to lungs. Ground level ozone is the major component of smog that blankets many urban areas. It is formed when nitrogen oxides from fuel combustion react with volatile organic compounds (VOC's) ...read more.

Other symptoms can include headaches, nausea, and allergic reactions. Long term health effects can include chronic respiratory disease, lung cancer, heart disease, and damage to brain, nerves, liver, or kidneys. Over the past several decades federal government agencies have been enforcing stricter laws to reduce air pollution. To reduce air pollution in the United States, the Clean Air Act Amendments of 1970 gave the EPA permission to establish air pollution standards and to enforce emission standards for factories and hazardous pollutants. Every state was required to meet ambient air standards by regulating the amount of pollutants from stationary sources, such as power plants and incinerators. Auto manufactures were also authorized to install exhaust controls or develop engines that produce less pollution. The most important long term solution to air pollution is the elimination of fossil fuels and the replacement of combustion engines. By doing this it will reduce the amount of pollution caused by motor vehicles. Other efforts being made to reduce air pollution are developing alternative energy sources, as well as different kinds of transportation engines, for example buses powered by electricity or steam. Other solutions could be increasing electricity and gasoline rates so that people will reduce the use of them and discourage waste and inefficiency. 1 ...read more.