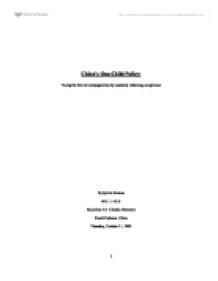 China's One-Child Policy: Facing the fear of overpopulation by austerely enforcing compliance By Sylvia Simson 992-11-4219 Recitation TA: Claudio Benzecry World Cultures: China Thursday, October 31, 2002 Mao Zedong, the founder of the People's Republic of China, is universally renowned for his charismatic guidance and revolutionary contributions to the country he lead during the mid-twentieth century. However, Chairman Mao's death in 1976, followed by Deng Xiaoping's takeover as leader of China in 1977, caused a major reconstruction of his communist ideologies and methods of governance. 1 When he administered the direction of the country, Mao's vision included the notion that a large population was a sign of strength and prosperity. It was only after he passed away that the government realized that the rapidly augmenting population was to pose numerous problems in China's near future. In 1979, the newly revitalized Chinese government "launched a serious birth-control campaign"2 that has come to be known as the One-Child Policy. This policy was implemented in hopes that a drastic approach to population control would efficiently manage their growing economic concerns. ...read more.

This, in combination with the IUDs (birth-control devices) that are forcibly put in place and the obliged sterilizations that also occur rampantly5, demonstrates the lack of human rights given to Chinese women, as her right to have numerous children is taken away from her and she is forced into state-imposed conformity. Of course, it must be understood that the strategic intent of the One-Child policy is indeed a legitimate one. The government felt threatened by the expected food scarcity due to overpopulation and the possible occurrence of a famine (such as the one that occurred after the Great Leap Forward from 1959-1962). As a result, the government chose to avoid all possible crises by controlling the population growth rate. Being concerned with the further economic development of the country is certainly a valid reason for implementing a strict, dominating policy. However, the rigorous enforcement of the One-Child Policy also causes the destruction of the traditional Chinese family structure, as well as degrades the role of the woman in Chinese society. ...read more.

This causes many women to officially not exist, and although this means that China will not have to deal with a "large demographic crisis in the ratio between males and females13", this demeans the 'unofficial' woman's rights and freedoms as an individual. Every person should have the ability to live freely with all their rights intact, and the fact that these illegitimate girls are being denied the right to even be considered as having an existence demonstrates the lack of concern related to human rights on behalf of the state. The state's intervention in manipulating the population growth rate can simply be described as the 'good of the group', or aiming to make the policy's objectives beneficial to the country as a whole. However, can the 'good of the group' really take precedence over the 'good of the individual'? Indisputably, the One-Child Policy put into practice by the Chinese government is a self-centered act that was created without regards to its many possible disadvantageous consequences. A country's desire to decrease their population growth rate cannot take priority over the ability to retain one's identity and to have individuality, over Chinese culture and traditional familial structure, or over women's rights and freedoms. ...read more.