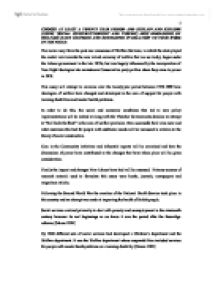 Choose At Least a Twenty Year Period and Explain and Explore (Using 'Social Constructionism' and 'Power') How Ideologies of Welfare Have Changed and Developed In relation to your work in the field.

CHOOSE AT LEAST A TWENTY YEAR PERIOD AND EXPLAIN AND EXPLORE (USING 'SOCIAL CONSTRUCTIONISM' AND 'POWER') HOW IDEOLOGIES OF WELFARE HAVE CHANGED AND DEVELOPED IN RELATION TO YOUR WORK IN THE FIELD. The move away from the post-war consensus of Welfare Services, in which the state played the central role towards the new mixed economy of welfare that we see today, began under the Labour government in the late 1970s, but was hugely influenced by the incorporation of New Right ideologies into mainstream Conservative party politics when they came to power in 1979. This essay will attempt to examine over the twenty-year period between 1979-1999 how ideologies of welfare have changed and developed in the area of support for people with learning disabilities and mental health problems. In order to do this, the social and economic conditions that led to new policy implementations will be looked at along with the Thatcher Governments decision to attempt to "Roll back the State" in the area of welfare provision. How successful their aims were and what outcomes this had for people with additional needs will be measured in relation to the theory of social construction. Care in the Community initiatives and influential reports will be examined and how the dimensions of power have contributed to the changes that have taken place will be given consideration. Finally the impact and changes New Labour have had will be assessed. Primary sources of research material used to formulate this essay were books, journals, newspapers and magazines articles. Following the Second World War the creation of the National Health Service took place in this country and an attempt was made at improving the health of British people. Social services evolved primarily to deal with poverty and unemployment in the nineteenth century however its real beginnings as we know it was the period after the Beveridge reforms. [Moore 1993] By 1948 different sets of social services had developed a Children's department and the Welfare department. ...read more.

[Clarke 1993 p.78] It was mainly due to the huge influence of this report that the 1990 Community Care Act came about this amounted to an enormous shake up in services and the way in which they were arranged. The act stated that social services departments prepare care plans for individuals on how their future needs and goals will be met these are still in use today. Local authorities had to honour the choices of the service users and their families, as they became the purchaser of services offered. 75% of the 1993-4 budgets for community care had to be spent on care in the independent sector, and only the remaining 25% could be spent on local authority care. [More 1993 p.153] This was a decision, which was not approved of by everyone Bob Abbereley spokesman for the Confederation of Health Service Employees said: "We are horrified that the Secretary of state appears to have effectively instructed local authorities to spend 75% of the provision on private facilities.... Simple decanting thousands of people into poorly regulated private homes is not care in the community, it is straightforward privatisation" [More 1993 p.153] The Labour government also criticized the plan by saying the Governments figures did not add up, it reported that their plan was �200 million short of funds needed to make it work and that this would lead to 12,000 elderly and disabled people at risk of not getting the care services they required. [The Guardian 3oct 1992] 1990 also saw the end of the Thatcher Government with John Major succeeding her. This appeared to have little impact on Welfare as the Major Government seemed in agreement of many of the Thatcher ideologies and was more concerned with uniting the party. [Jones 1997] In 1993, The new system of community care came fully into operation and whilst the idea of people purchasing the services they require while living in their own home is a socially constructed ideal most would agree with the reality is not always as straight forward. ...read more.

Crisis add to this an estimated 400,000 hidden homeless, missing from government statistics [Big Issue 2001]. The Tomlinson Report 1993 estimate that around half of these people have significant psychiatric problems [Cohen 1993] In many public services, New Labour's determination to stick to Conservative spending plans meant that the necessary long-term investment has only just begun. On balance New Labour's attempt at restructuring the welfare state may be seen as positive if it is judged in the light of the social legacy of the Thatcher/Major years, but few in the social care field would argue that many more resources need to be provided. The impact of the changes in welfare are not easily assessed, complex political, economical and social forces as well as internal and international pressers have shaped the British welfare regime in the last twenty years. The move towards Community Care and Normalisation programmes for people with learning disabilities and mental health problems have challenged the deeply constructed views by some and have been welcomed the majority as a positive step into a more decent and caring society. With the help of social constructionism consideration was given to the social problems that existed within community care. The Victorian notion of locking people up because they had special needs in institutions was then questioned because of cost but also because it was no longer deemed socially or culturally acceptable. The three dimensions of power then come in to play and their influence has developed and re-shaped the social policy, on the whole in favour of people with special needs. Let us hope that the good work that has been done and positive intent to do more will continue and welfare promises by what ever Government are in power are transferred into practice and the funding needed to enable a wider range of support with special needs to take more control over their lives in the wider community. 1 ...read more.