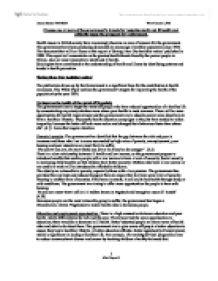 Choose one or more of the government's targets for reducing death and ill health and critically assess the prospects for achievement.

Choose one or more of the government's targets for reducing death and ill health and critically assess the prospects for achievement. Health issues in British society have increasingly become an area of concern for the government. The government have been producing documents to encourage a healthier population since 1976. The document that will be a focus in this report is 'Saving lives: Our healthier nation' published in 1999. This report will concentrate on the greatest health threats faced by the poorer people in Britain, who are most vulnerable to death and ill health. Sociologists have contributed to the understanding of health and illness by identifying patterns and trends in health promotion. 'Saving lives: Our healthier nation' The publication drawn up by the Government is a significant base for the contribution to health awareness. This White Paper outlines the government's targets for improving the health of the population by the year 2010. To improve the health of the worst off in society The government aims to target the worst off people who have reduced opportunities of a healthy life by concentrating on poverty stricken areas where poor health is most common. There will be more opportunities for health improvement and the government aim to educate poorer areas about how to have a healthier lifestyle. ...read more.

This is one of the many food campaigns that are aiming to increase the good food that people eat. Poverty, whether absolute or relative has been a significant focus for many sociologists, who have contributed to the understanding of health and illness in many ways. The sociology of poverty is one that many viewpoints can be argued. Political economy derived from a Marxist perspective that argues material and economic factors are behind the opportunities of people. In the 1980's the division between the rich and poor was growing wider, thus the opportunities for healthy lifestyles were also. Political economy argue that the working class are exposed to worse conditions in all aspects of their life, therefore creating less opportunities for health benefits. Such poor living conditions and low incomes can reduce one's access to health awareness. The working class have less availability to healthy diets due to their low income. However, the political economy do not argue that there is no choice for poorer people, instead, it is suggested that working class areas are more vulnerable to ill health. Political economy argues that health promotion is unable to tackle ill health due to the focus put upon behaviour and lifestyle as opposed to social constraints on people. The Marxist approach to poverty and ill health concentrates on capitalism. ...read more.

This can result in ill health, as there is a lack of awareness in how to have a healthy lifestyle. Less educated people do not have the same opportunities for employment, and the employment they do take on is low paid and often bad working conditions and benefits. This can lead to ill health, as there is no access to healthy food or in later life a reduced pension. From a social democratic approach, they argue that people from deprived areas are caught up in a poverty trap where state benefits are lost due t gaining employment. As a result, there is no incentive to work. This can lead to bad health in later life, as there is lack of security when elderly. For example, if a single mother was caught in a poverty trap and remained on benefits, she would not have secure pension. Therefore, when she is elderly she will have restrictions that could affect her health. Social democrats argue that expectations for housing and benefits have increased, resulting in the expense being too high for the government. However, the government provide basic living standards for people in poverty to reduce health risks. In conclusion, poverty is a concerning aspect that results in ill health. Factors such as education, employment and housing are all affected by lack of financial security. The elderly are vulnerable to poverty and bad health as they may not have been able to secure themselves for retirement. ...read more.