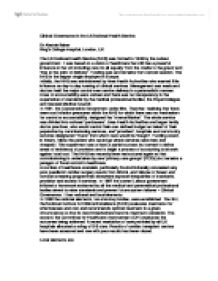 Clinical Governance in the UK National Health Service Dr Alastair Baker King's Colloge Hospital, London, UK The UK National Health Service (NHS) was formed in 1948 by the Labour government. It was based on a vision of healthcare that still has a powerful influence in the UK including care for all equally 'from the cradle to the grave' and 'free at the point of delivery'. Funding was and remains from central taxation. The NHS is the largest single employer in Europe. Initially, the NHS was administered by Area Health Authorities who exerted little influence on day-to day running of clinical services. Management was weak and doctors held the major control over service delivery in a paternalistic manner. ...read more.

The NHS has recently been restructured again so that commissioning is undertaken by new 'primary care groups' (PCGs) but remains a paragon of fiscal control in healthcare. A number of healthcare scandals, particularly the institutionally concealed very poor paediatric cardiac surgery results from Bristol, and failures of breast and cervical screening programmes elsewhere exposed inequalities of standards, provision and access to services. In 1997 the current Labour government initiated a framework endorsed by all the medical and paramedical professional bodies aimed to raise standards and prevent future system failures - Clinical Governance. It has national and local elements. In 1999 the national elements, two statutory bodies, were established. The first, the National Institute for Clinical Excellence (NICE) ...read more.

Problems encountered have included: 1. Shortage of time, resources and skills necessary for the new tasks 2. Use of new managerial language and ideas - perceived shifting of power from doctors to managers 3. 2 perceived as threatening - failure to engage some individuals 4. Perceived distance between language and reality of process, i.e. Clinical Governance often does not affect how patients are treated 5. Implies culture change Conclusions: Clinical Governance is the framework for the implementation of a national strategy to improve quality of care in the UK NHS. It is a large and ambitious programme to be implemented over 10 years. Good early progress has been made but success requires a major change in culture and behaviour throughout the organisation. ...read more.