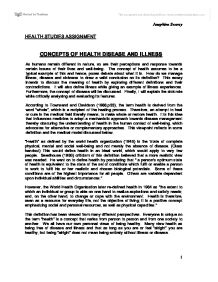 Concepts of health disease and illness.

HEALTH STUDIES ASSIGNMENT CONCEPTS OF HEALTH DISEASE AND ILLNESS As humans remain different in nature, so are their perceptions and response towards certain issues of their lives and well-being. The concept of health assumes to be a typical example of this and hence, poses debate about what it is. How do we manage illness, disease and sickness to draw a valid conclusion on its definition? This essay intends to discuss the meaning of health by exploring different definitions and their contradictions. It will also define illness while giving an example of illness experiences. Furthermore, the concept of disease will be discussed. Finally, I will explain the sick role while critically analysing and evaluating its features. According to Townsend and Davidson (1988,p33), the term health is derived from the word "whole", which is a recipient of the healing process. Therefore, an attempt to heal or cure in the medical field literally means, to make whole or restore health. It is this idea that influences medicine to adopt a mechanistic approach towards disease management thereby obscuring the understanding of health in the human context of well-being, which advocates for alternative or complementary approaches. This viewpoint reflects in some definition and the medical model discussed below. "Health" as defined by the world health organization (1946) is the 'state of complete physical, mental and social well-being and not merely the absence of disease. (Class handout) This would define health in an ideal world, which would apply to very few people. Seedhouse (1986) criticism of this definition believed that a more realistic view was needed. He went on to define health by postulating that " a person's optimum state of health is equivalent to the state of the set of conditions which fulfil or enable a person to work to fulfil his or her realistic and chosen biological potentials. Some of these conditions are of the highest importance for all people. ...read more.

However there are also theories that try explaining the results of the Black report, suggesting that the system of health care is not such an important factor as other life circumstances that affect the health of different classes. The artefact theory suggests that the use of surveys for statistics is inaccurate because it fails to take into consideration the clinical iceberg where it is unknown how many people suffer illness as they don't always report it also most health care happens in the home usually women treating symptoms by self care, in the case of postal surveys not everyone will respond and women often fill in forms for other family members. It is also unreliable because the figures relate to males of working age and not females and older and younger people and the statistics change all the time. However another study known as the Whitehall study gave evidence that there is a "real" relationship between social class and health outcome. To explain inequalities in health and social class, which has been highlighted in explanations such as the artefact explanation, "theories of natural or social selection, materialist or structuralist, and cultural and behavioural explanations" (Townsend and Davidson 1988 p, 104). Therefore in theory, reducing inequalities in health will be adopting strategies that will modify or tackle the explanations given above. One-way of achieving this is already attained; though not specific in particular populations. This means identification of local inequalities targets such as that by "King's Fund Policy Paper" which recommends strategies for reducing local inequalities in health and "Our Healthier Nation" which was set up by the government in England to improve the health of the worst off in society and to narrow the health gap. Societal view of health in particular in multi-cultural Britain today varies from one culture to another. In societies what appears to be abnormal or unacceptable is often labelled as disease, conflicts arise because what accounts for illness differs from place to place and from time to time. ...read more.

Although some factors that influence our health are beyond our control, such as age, sex and heredity, influencing factors like our eating habits, life styles, social relationships and our environment can be adjusted to promote our well-being. Recommendation I think that there is a need for a holistic approach to health promotion. The government has put in place strategies to help reduce inequalities in health by "ensuring that the needs of people who have suffered the effects of inequality for too long are placed at the center of plans for health and social improvement". This is a good start as far as reducing inequalities is concerned but the government also needs to make sure that these people who have suffered the effects are not only aware of this proposal or by making health, housing, education, or employment opportunities more accessible but trying to educate people in promoting their own health for example * Teaching them how to avoid products, which are harmful to our health such as smoking, alcohol, junk food and illegal drugs by providing counseling, self-help groups leaflets and open day seminars. * Learning ways to detect signs of illness or disease like unusual lumps or persistent symptoms. * Making a visit to the doctor a learning experience rather than an ordeal by empowering individuals. * Providing periodic health screening programmes. Evaluation This assignment has been very useful in that it has given me a whole new perspective on the concept of health, illness and disease. It has made me aware of how I see society and how society sees me. It has also enabled me to reflect on my health and has given me a way forward in promoting my family's health. It has also raised my awareness of the different aspects of health because I thought being healthy was just physical, I now realize that it involves our emotional, social, spiritual and mental well being as a whole. ...read more.