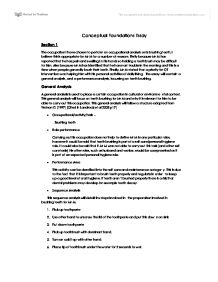 Conceptual Foundations Essay Section 1 The occupation I have chosen to perform an occupational analysis on is brushing teeth. I believe this is appropriate for Mr M for a number of reasons. Firstly because Mr M has reported that he has pain and swelling in his hands so holding a toothbrush may be difficult for him. Also because Mr M has identified that he has most trouble in the morning and this is a time when people generally brush their teeth. Finally, Mr M stated that a priority for OT intervention was helping him with his personal activities of daily living. The essay will contain a general analysis, and a performance analysis, focussing on teeth brushing. General Analysis A general analysis is used to place a certain occupation in cultural or environmental context. This general analysis will focus on teeth brushing for Mr M and why it is relevant for him to be able to carry out this occupation. This general analysis will follow a structure adapted from Watson D (1997) (Cited in Landrock et al 2008 p17) * Occupational/activity/task - Brushing teeth * Role performance Carrying out his occupation does not help to define Mr M in any particular roles, however it could be said that teeth brushing is part of a self care/personal hygiene role. ...read more.

* Joints/muscles Mr M has problems with his hands becoming sore and swollen. In order to hold his toothbrush Mr M would have to be able to grip and be able to hold the brush quite tightly so he doesn't drop it and so he can brush his teeth thoroughly * Movements/ actions The task involves gripping the toothbrush and moving it up and down. This could be a problem for Mr M with his painful and swollen hands. A way to minimise this for Mr M may be to use an electric toothbrush which usually have bigger handles and would require less movement. * One or two hands and feet The task is one which allows Mr M to be stationary and have both feet on the ground or even sit down. The task requires the coordination of both hands in order to put the toothpaste on the brush however the actual brushing only requires one hand so Mr M could use the hand which is less painful. * Strength/muscle power The task does not require a great deal of strength however it does require that the brush be tightly held on to and that a certain amount of force can be applied so the teeth can be brushed vigorously. * Stamina/endurance The nature of the task means that Mr M would have to be able to stand for roughly 5 minutes in order to carry out the whole process. ...read more.

However Mr M is finding that his personal capacity for these tasks is not great and therefore the OT working with Mr M will have to find strategies to make this easier for him. The second of the main concepts of the model of human occupation is habituation. This is described at 'semiautonomous pattern of behaviour in concert with familiar temporal, physical and social habit' (Kielhofner 2007). In other words habituation refers to habits that people have over the course of their days, weeks, etc. Habituation can be considered in terms of Mr M in that his personal activities of daily living are something that he will have got into a habit of doing from a very young age so if Mr M finds himself unable to do these things this could contribute to his low mood, as this is something he will have got used to doing. It will therefore be important for Mr M to carry on his self - care routines. The third concept of MOHO is performance capacity. This part is concerned with a persons ability to carry out a task. In terms of Mr M an occupational therapist could consider both whether he is physically able to carry out a task and whether he is mentally able to do it. At present Mr M is having difficulty carrying out tasks, specifically personal care tasks, due to the pain and swelling in this hands and knees. http://web.ebscohost.com/ehost/pdf?vid=3&hid=106&sid=78b17b01-31e1-4bac-91e1-9a18925025f1%40sessionmgr107 URL: http://dx.doi.org/10. ...read more.