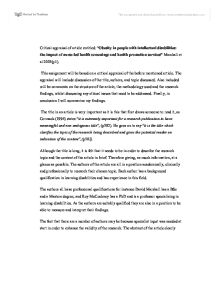 Critical appraisal of article entitled: "Obesity in people with intellectual disabilities: the impact of nurse-led health screenings and health promotion services" Marshall et al 2003(p1). This assignment will be based on a critical appraisal of the before mentioned article. The appraisal will include discussion of the title, authors, and topic discussed. Also included will be comments on the structure of the article, the methodology used and the research findings, whilst discussing any ethical issues that need to be addressed. Finally, in conclusion I will summarize my findings. The title in an article is very important as it is this that first draws someone to read it, as Cormack (1996) states "it is extremely important for a research publication to have meaningful and non ambiguous title", (p382). He goes on to say "it is the title which clarifies the topic of the research being described and gives the potential reader an indication of the content",(p382). Although the title is long, it is felt that it needs to be in order to describe the research topic and the content of the article in brief. Therefore giving, as much information, at a glance as possible. The authors of the article are all in a position academically, clinically and professionally to research their chosen topic. Each author has a background qualification in learning disabilities and has experience in this field. ...read more.

Academically the aims of the study are important as the findings of the research will assist future researchers on this and similar topics and the findings will assist health care professionals that are involved in the care of clients that are overweight or obese and who also have intellectual disabilities. It could be argued here that the hypothesis is to prove that the necessary follow up of these individuals will not be undertaken, as in the introduction of the report it states that "the physical health and well-being of people with intellectual disabilities has not been promoted to the same extent as with non disabled people" (Marshall et al 2003, p2). Although the report itself reads more, like it wants to investigate and alter any negligent practice towards the clients than necessarily prove a hypothesis. It is not essential to formulate a hypothesis. (Ogier, 1998). Therefore I feel this particular article doesn't have a research hypothesis. The article is a mix between qualitative research, that is as identified by Ogier (1998) "research which paints a picture in words and aims to identify concepts and common themes" (p84) and quantitative research which is described by Ogier as "research in which the data is numerical and seeks to test hypothesis by statistical analysis of the data"(p84). The type of research study used within the study is descriptive research which Ogier describes as "the researcher tries to describe accurately the findings derived from careful, systematic collection and recording of information or data" (p39) ...read more.

The discussion of the article carefully discusses the findings in a detailed manner. The presentation of the tables was a helpful way of disseminating the findings and the conclusion is well structured and thoroughly evaluates the findings, whilst confirming that people with intellectual disabilities who are overweight or obese need more specialist services to promote health. The study more or less proved that if these types of services are offered to this particular client group they are accessed on a regular basis. The results mostly agree with other reports on this particular topic, although this study found that "unlike past studies, no significant differences were found among males and females in levels of obesity" (Marshall, 2003, p8). The conclusion extends beyond the results and discusses ways in which nurse led health promotion activities can help reduce weight in the clients. The professional implications, for people involved in the care of people, with intellectual disabilities are that health promotion and education needs to be more widespread among these individuals and more readily available. The report suggests that future research could target overweight adolescents with intellectual disabilities so that it can be understood what influences their developing lifestyles and eating habits. The references used, suggest a vast amount of research was carried out on this topic whilst conducting this study. They also allow the possibility of further studying on this topic. The referencing is accurately documented, only a few minor grammatical mistakes are noticed throughout the article. ...read more.