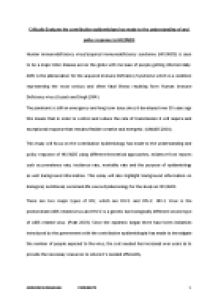 ﻿Critically Evaluate the contribution epidemiology has made to the understanding of and policy response to HIV/AIDS Human immunodeficiency virus/acquired immunodeficiency syndrome (HIV/AIDS) is seen to be a major killer disease across the globe with increase of people getting infected daily. AIDS is the abbreviation for the acquired immune Deficiency Syndrome which is a condition representing the most serious and often fatal illness resulting form Human immune Deficiency virus (Cusack and Singh 1994). The pandemic is still an emergency and long term issue since it developed over 30 years ago this means that in order to control and reduce the rate of transmission it will require and exceptional response that remains flexible creative and energetic. (UNAIDS 2004). This essay will focus on the contribution epidemiology has made to the understanding and policy response of HIV/AIDS using different theoretical approaches, evidence from reports such as prevalence rate, incidence rate, mortality rate and the purpose of epidemiology as well background information. This essay will also highlight background information on biological, nutritional, social and life course Epidemiology for the study on HIV/AIDS. There are two major types of HIV, which are HIV-1 and HIV-2. HIV-1 Virus is the predominant AIDS related virus and HIV-2 is a genetic but biologically different second type of AIDS related virus. (Pratt 2003). Since the epidemic began there have been initiatives introduced by the government with the contribution epidemiologist has made to investigate the number of people exposed to the virus, the cost needed has increased over years as to provide the necessary resources to where it?s needed efficiently. In the twenty first century Epidemiology was drawing on conclusions from biology and sociology to biostatistics and philosophy of science which investigates the causes of human disease and their methods for their control (Yarnell 2007). Moon et al (2000) defines Epidemiology as the study of patterns of disease occurrence in human populations and the factors that influence these patterns. ...read more.

This study identified that there is a risk of HIV infections amongst poor people due to lack of knowledge and education as well as poverty related problems. The researcher analysed the results by using a probability sampling of 12,000 women who are aged between 15 and 19 years old. This study showed that the people who lived in deprived areas were not likely to use condom during sexual activities, not having full knowledge about the precautions of not using condom. However this study had an implication because of the year the data was collected through self-report as there could be an increase of bias and also any attempt to reduce HIV/AIDS should consider poverty being one of the social causes Tladi (2006) Other social factors include the economic and social conditions that affect the health of the population in a community as a whole as well as education, health services, food security, access to services and housing. (Fenton et al 2010) Other approach used to understand the causes of illness includes the bio medical approach to health which focuses on the biological components of the body. Wall and ottewill (2004) highlights that biomedical model of health emphasises on the biological causes and manifestations of disease and ill-health. This biological cause includes virus, bacterium, germs and internal faults in the body. Similarly to this, Villarreal et al (1994) illustrates that HIV is a type of virus called retrovirus which binds itself to the surface of an uninfected cell which then multiply to affect other cells in the body. These retroviruses that cause AIDS are grouped into two forms called lentiviruses and HTLV-BLV which are extremely important as they cause human disease (Pratt 2003). Another branch of epidemiology that is important within the study of disease in a population is nutritional epidemiology which studies the relationship between diet and health in a human population (Byers 1999). ...read more.

Different countries have already introduced approaches, which include public campaigns, mobile testing, workplace testing and home- and school-based testing (Progress report 2011) these testing makes it possible for services to be provided to communities or known people who is infected with HIV. (Progress report 2011) In conclusion, HIV/AIDS is a global epidemic which is increasing rapidly in Africa where it is said to have the highest number of people living with the disease without any cure. Although various researches has been carried out using different approaches to understand HIV/AIDS, there are still gaps within the research and the need to carry more studies in HIV/AIDS from a life course perspective to give more in depth as to how an individual becomes infected. However epidemiologists have made a massive contribution to the understanding of HIV/AIDS using different epidemiological approaches such as social, biological and nutritional. Some studies carried out over the last 30 years since the birth of HIV/AIDS has given the us insight as to how the epidemic has increased within the years Therefore it is extremely important that the government continue to develop new initiatives in order to tackle this global epidemic. Previous initiatives introduced by the government such as HIV testing, promoting safe sexual practices by giving out free condoms in GUM clinics, awareness campaigns have helped limit the risk of passing the infection onto to others. Furthermore more research needs to be carried out in nutritional epidemiology by taking account into people who live in poor deprived areas and creating more advanced for tool for accessing dietary intake. Despite all the measures that have been taken to limit the spread of the deadly virus, Government still need to ensure that there is adequate supply of treatments available for people suffering with HIV. Public health policy makers must be developed amongst different health services to tighten referral systems so that people suffering from HIV can have the opportunity to access each service and finally safer sex practice and guidelines will need to be established as it?s one of the options of limiting the risk of transmission to others. ...read more.