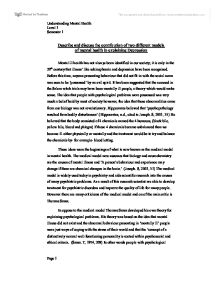 Describe and discuss the contribution of two different models of mental health in explaining Depression.

Describe and discuss the contribution of two different models of mental health in explaining Depression Mental ill health has not always been identified in our society; it is only in the 20th century that illness' like schizophrenia and depression have been recognised. Before this time, anyone presenting behaviour that did not fit in with the social norm was seen to be 'possessed' by an evil spirit. It has been suggested that the accused in the Salem witch trials may have been mentally ill people, a theory which would make sense. The idea that people with psychological problems were possessed was very much a belief held by most of society however, the idea that these abnormalities came from our biology was not revolutionary. Hippocrates believed that 'psychopathology resulted from bodily disturbances' (Hippocrates, n.d., cited in Joseph. S, 2001, 33) He believed that the body consisted of 4 chemicals named the 4 humours, (black bile, yellow bile, blood and phlegm) if these 4 chemicals became unbalanced then we became ill either physically or mentally and the treatment would be to try and balance the chemicals by- for example- blood letting. These ideas were the beginnings of what is now known as the medical model in mental health. The medical model now assumes that biology and neurochemistry are the causes of mental illness and 'A person's behaviour and experience may change if there are chemical changes in the brain.' ...read more.

If the person decides they do not want to seek help then they should be left to get on with their lives and should they harm anyone, be punished in the same way as a person of stable mind. Should they choose to be treated, Szasz believes that self knowledge is the key to treatment, and that a psychiatrist's job ought to be to help the person realise what they are doing. The client should define when the therapeutic relationship should end. Ultimately this would happen when the person believes their problem has been solved and they are happy with the changes made to their lives. It could be said that cognitive behavioural therapy may be similar to Szasz's idea of how someone should be treated. In cognitive behavioural therapy the therapists job is to help the client realise how absurd their thoughts actually are and then help them to change their behaviour. However Szasz, depending on how the therapist goes about helping, may dispute the fact that the therapist is to help change the client's behaviour as his view is that no coercion should be involved. (ed. Cutting. P, Hardy. S & Thomas. B, 2002, 25) The treatment he suggests is the same for every disorder including depression, as Szasz does not believe in the classification of mental illness This view of treatment heavily contrasts with the medical model's view of treatment (SEE APPENDIX 3 FOR A CAREPLAN FOR DEPRESSION) ...read more.

There is no provision for this section to be renewed or extended. The imposition of a second Section 2 immediately after the end of the initial 28 days is not explicitly prohibited in the Act, but would be extremely bad practice. The 28-day period is intended to give sufficient time for an assessment of the person's mental health difficulties to be made. If continued detention is required, then Section 3 should be used. Conditions The grounds for the Application, as stated in the Act, are that the person: is suffering from mental disorder of a nature or degree which warrants the detention of the patient in a hospital for assessment (or for assessment followed by medical treatment) for at least a limited period; and he ought to be so detained in the interests of his own health or safety or with a view to the protection of other persons. Notes This Section will typically be used when someone is compulsorily admitted to hospital for the first time, or on subsequent admissions where there is a considerable gap of time between periods in hospital. If a person is well known to a psychiatric service and relatively little specific assessment is needed, then they may be admitted under Section 3 - for treatment. Section 2 also provides for treatment during or following the assessment, but for the limited 28-day period . Taken from: Turner N, 1996-1998, Nigel Turners HyperGuide to the Mental Health Act, [Online], Available from: http://www.hyperguide.co.uk/mha/overview.htm, [Accessed 23/01/04] Understanding Mental Health Level 1 Semester 1 Page 1 ...read more.