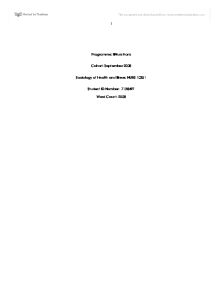 Describe what is meant by the term `social determinants of health'. Discuss the evidence of how work has an impact on health. Outline the implications for nursing practice.

Programme: BNurs Hons Cohort: September 2008 Sociology of Health and Illness: NURS 10351 Student ID Number: 7138497 Word Count: 2508 Describe what is meant by the term `social determinants of health'. Discuss the evidence of how work has an impact on health. Outline the implications for nursing practice. Introduction The aim of this assignment is to discuss the evidence of the impacts that work can have on an individual's health. Health has been defined as a state of complete physical, mental and social wellbeing and not merely the absence of disease or infirmity (World Health Organisation - WHO, 1946). Therefore, health is viewed as a much broader concept in that it includes social wellbeing. It has long been recognised that social determinants can influence health. There are many social determinants of health, for example food, stress, early life, transport, social gradient, unemployment, social support, addiction and social exclusion. However, the intention of this assignment is to discuss the evidence of the impact of work, as a social determinant, on health. Secondly, this assignment will explore the work of Babbage, Taylorism and Fordism in relation to the influence on the development of work. The discussion will also include how work within the UK has changed over the last 20 to the 30 years and a description and evidence of the effects of paid and unpaid work as well as the boundaries between the two will also be illustrated. ...read more.

and Miers (2003) study of emotional and physiological factors and CHD. Evidence of the impact work can have on health includes the connection between stress and different diseases, particularly coronary heart disease, type 2 diabetes and some mental health illnesses that stress is known to have a link to. All these links are discussed below. Karasek's job strain model (1979) and the effect reward imbalance model, Marmot et al (1999) demonstrate how negative health effects within the workplace can impact on health. Karasek's job strain model also known as the demand control model states that the stressors of work can be caused by a high level of psychological demands, such as working fast and not having enough time to get everything done combined with a low level of decision making and low control in meeting the demands that had been made. Karasek and Theorell (1990) noted that learning may contribute to a worker's possibility of applying control over the work situation. Marmot et al (1999) states that the effort reward imbalance model is associated with recurrent options of contributing and performing within a workplace setting and in turn being rewarded and feeling a sense belonging to a significant group, for example work colleagues. Marmot et al found six studies which reported findings relevant to his model. The Whitehall II studies (Bosma et al 1998) and a German blue collar manual work study (Siegrist et al 1990) ...read more.

Implications for Nursing Practice The consequential problems due to chronic stress in the workplace have been recognised and some solutions have been made to endeavour the problem. The majority of social determinants have various implications for nursing, according to Gordon et al (1999) the NHS have two interlinked responsibilities in relation to health inequalities. Firstly to provide equitable access to effective healthcare in relation to the individual's needs and secondly to work in partnership with other agencies to tackle the broader determinants of health. They also pointed out that in terms of equity the observations of the NHS should be to contribute towards reducing inequalities in health status, achieve equality of access to health services in relation to need and finally to achieve equality of treatment and intervention outcomes. A document published by the Canadian Nursing Association (CNA) also pointed out that individual nursing practices have a lot of input when addressing problems associated with social determinants of health. Within an individual practice nurses could ask questions when doing an assessment to see if there is a link between their patient's illness and stress at work and understand the impacts that different social determinants can have on a patient's health. It has also been suggested that nurses are u to date with what services are available to their patient's within their area of residence and to help them make a link with social determinants and help them understand the common health issues that are associated with them. ...read more.