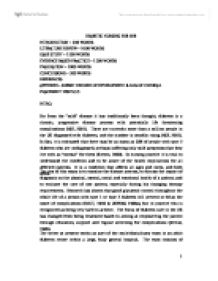 DIABETIC NURSING ENB 928 INTRODUCTION - 500 WORDS LITERATURE REVIEW - 1000 WORDS CASE STUDY - 1500 WORDS EVIDENCE BASED PRACTICE - 1500 WORDS EVALUATION - 1000 WORDS CONCLUSIONS - 500 WORDS REFERENCES APPENDIX - SUBMIT RECORD OF DEVELOPMENT & LOG OF CLINICAL PLACEMENT VISITS (2) INTRO. Far from the "mild" disease it has traditionally been thought, diabetes is a chronic, progressive disease process with potentially life threatening complications (NSF, 2001). There are currently more than a million people in the UK diagnosed with diabetes, and the number is steadily rising (NSF, 2001). In fact, it is estimated that there may be as many as 50% of people with type 2 diabetes who are undiagnosed, perhaps suffering only mild symptoms that they live with as "normal" for them (Krentz, 2000). In nursing practice it is vital to understand the condition and to be aware of the health implications for all affected patients. It is a condition that affects all ages and races, and both sexes. The aim of this essay is to examine the disease process, to discuss the impact of diagnosis on the physical, mental, social and emotional health of a patient, and to evaluate the care of one patient, especially during his changing therapy requirements. Research has shown that good glycaemic control throughout the whole life of a person with type 1 or type 2 diabetes will prevent or delay the onset of complications (DCCT, 1993 & UKPDSG 1998a), but in practice this is recognized as being very hard to achieve. The focus of diabetes care in the UK has changed from being treatment based to aiming at empowering the patient through education, support and regular screening for complications (Jerreat, 1999). The writer at present works as part of the multi-disciplinary team in an adult diabetes centre within a large, busy general hospital. The team consists of consultant diabetologists, registrars, specialist clinical assistants and senior house officers, diabetes specialist nurses, a nurse trained in screening for complications, clinic nurses, dietitians, podiatrists and retinal screeners and technicians. ...read more.

He had spent some time between diagnosis and the DSN consultation looking at diabetes care on the Internet, and was aware that more exercise and losing weight would help to bring down his blood-glucose level (NICE, 2002a). Tom and the DSN set certain goals together, and both agreed to give this program of diet control and exercise a trial for a few months. Tom commenced a regular program of swimming before work, and brisk walks in the evenings, as well as weekly sessions at a gym. He was taught to use a blood glucose meter and advised when to test. He adapted to this very well at first, and reported an increase in fitness and a reduction in weight. His blood glucose records showed pre-meal readings gradually reduced to about 6-7 mmols/l. This continued for two years and the annual complications checks for retinopathy, nephropathy and neuropathy showed no changes from Tom's initial screening. However, after this period Tom changed his job and was unable to keep up the increased level of activity, and although his weight had initially reduced, he began to increase in weight and regained his pre-diagnosis weight. This reached a plateau, and remained constant for a further year, but then his glucose levels gradually began to rise. At first he did nothing about this, as his weight began to reduce a little, which he was pleased about, as it had been of concern to him. However, when his daily blood tests were averaging 10-11 mmols/l he contacted the DSN for advice. The DSN suggested that Tom try OHAs to reduce his glucose levels, and contacted the GP to prescribe metformin tablets. These have the added advantage of reducing insulin resistance in the tissues, and can help to reduce weight (Jerreat, 1999). However, they can have moderate to severe gastro-intestinal side effects, and unfortunately Tom did suffer from abdominal discomfort and diarrohea at first. ...read more.

Tom has come to terms with his condition, and feels that he is in control of it rather than the other way around; not all patients respond to education in this way. It can be difficult to accept that empowering a patient means that they are free to make their own health decisions, even if they are considered to be poor choices by the DSN or other medical staff (Jerreat, 1999). It is important not to be critical or condemning in such a case, as the patient may later regret such decisions, and needs to feel that he or she can come for help or advice without censure (Jerreat, 1999). The medical profession is now coming to accept that targets set, for example, by the UKPDSG (1998a) and the DCCT (1993) studies are somewhat unrealistic in practice, and have the effect of de-motivating patients who fail in their efforts to achieve them (Winocour, 2002). The education of type 2 diabetic patients therefore has to be flexible and able to be adapted to all races, cultures and levels of understanding (Bradshaw et. al., 1999). This has become the role of the practice and specialist nurse, both of whom are in an ideal position to evaluate the effectiveness of particular methods in their local area of practice. In March 2003 there is to be the publication of an appraisal of patient education models (NICE, 2002a) in which it is expected that individual and group educative methods will be shown to be the most effective (Bradshaw et. al., 1999). Of course, to implement a greatly increased service in this area will require increased funding, which it is hoped will be one benefit to come out of the National Service Framework. Ultimately, the cost to the NHS now to implement the strategies should be recouped later by less use of medical treatment of diabetic complications. The cost to the patient and future benefit is harder to evaluate, but certainly for Tom and his family, encouraging a healthy lifestyle now is making it possible for him to live a life that is as near to "normal" as possible. ...read more.