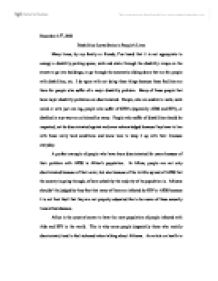 December 11th, 2002 Disabilities Leave Stains in People's Lives Many times, by my family or friends, I've heard that it is not appropriate to occupy a disability parking space, walk and skate through the disability ramps on the streets to go into buildings, or go through the automatic sliding doors that are for people with disabilities, etc. I do agree with not doing these things because these facilities are there for people who suffer of a major disability problem. Many of these people that have major disability problems are discriminated. People, who are unable to walk, walk weird or with just one leg, people who suffer of STD's (especially AIDS and HIV), or disabled in any way are criticized by many. People who suffer of disabilities should be respected, not be discriminated against and even acknowledged because they have to live with these really hard conditions and know how to keep it up with their illnesses everyday. A perfect example of people who have been discriminated for years because of their problem with AIDS is Africa's population. In Africa, people are not only discriminated because of their color, but also because of the terrible spread of AIDS that the country is going through, of how unhealthy the majority of its population is. Africans shouldn't be judged by they fact that many of them are infected by HIV or AIDS because it is not their fault that they are not properly educated like to be aware of these sexually transmitted diseases. ...read more.

(1) People who suffer from AIDS and HIV are benefited by this law. The website www.nolo.com explains people their rights and gives them information about the laws that supports them. People can also write with questions and concerns about certain topics. An anonymous wrote asking if he was forced to answer when an employer to ask him if he was taking any prescription drugs or this was an illegal act of the employer. The answer of Auntie Nolo (this is how the person who answers the questions and concerns in known as in the website) was: "The ADA requires that all job decisions be based on the applicant's ability or inability to do the job and not on any other disability that the applicant might have. This means that it is flat-out illegal for employers to ask during an interview the question that you were asked about prescription drug use. Employers cannot ask during a pre-employment interview questions about medical conditions, past or present, or about whether the applicant is disabled or about the severity of a disability." Not only people who suffer from AIDS and HIV are discriminated. Another example of a large group of people that are discriminated is people who have physical disabilities. Many times, people think that people who suffer of disabilities are unable to do things right. People don't know, but many times they can be capable of doing things better than a very healthy person. ...read more.

He gives three cases as examples. The saddest one of the three is the case of Shawn Witte diagnosed with "Tourette's Syndrome, asthma, attention deficit disorder, an emotional disability and deformities of the feet and legs" (Weber 1), because he had so many disability problems, and yet he was attacked so much by his superiors in school. With only 10 years old, his teacher forced him to eat oatmeal, and with the help of the aide, she would mix it with his own vomit and keep feeding him of it. The principal told his mother that they did this as a punishment when he didn't do things right. The teacher and aides sat on Shawn when he did involuntary movements (such as tics) and would make him write sentences like "I will not tic" and "I will not tell my mom". Shawn was taken to the emergency room because the aide choked him when he didn't run fast enough in his class of exercises. (Weber 1-2) People with disability problems should be proud of themselves for knowing how to fight against something we'll never know how it is like, unless we go through it ourselves. All the information in this document shows that the strongest reason for us not to discriminate against people with disabilities is that segregation against them hurts them very much, and causes them to deteriorate and suffer. By discrimination against them we're only helping to make them more depressed, weaker and, for some of them, even shorter life term period. ...read more.