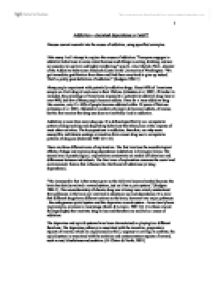 Addiction - chemical dependence or habit? Discuss current research into the causes of addiction, using specified examples. I this essay I will attempt to explore the causes of addiction. "Everyone engages in addictive behaviours to some extent because such things as eating, drinking, and sex are essential to survival and highly reinforcing," says G. Alan Marlatt, Ph.D., director of the Addictive Behaviours Research Centre at the University of Washington. "We get immediate gratification from them and find them very hard to give up indeed. That's a pretty good definition of addiction." (Rodgers 1994:1) Many people experiment with potentially addictive drugs. About 60% of Americans sample an illicit drug at least once in their lifetime (Johnston et al. 2001). If alcohol is included, the percentage of Americans exposed to a potentially addictive drug rises to over 90%, but few of these people become addicts. Even for a very addictive drug like cocaine, only 15-16% of people become addicted within 10 years of first use (Johnston et al. 2001). Substantial numbers of people do become addicts, of course, but the fact remains that drug use does not inevitably lead to addiction. Addiction is more than mere drug use. ...read more.

However, research has revealed that the active component of cannabis, delta-9-tetrahydrocannabinol (THC), produces enhancement of brain-stimulation reward in rats, at (proportional) doses within the range of human use (Gardner 1992:). Studies have also revealed cannabinoid receptors in areas associated with brain reward and that THC increases dopamine levels (Adams and Martin, 1996:) It is these reward systems that addicts have difficulty overcoming. Subsequent tolerance to the effects of drugs and withdrawal when drug use stops are both the result of neuroadaption (Koob, Caine, Parsons, Markou, & Weiss, 1997:). Animal models have shown that stressful stimuli activate the dopamine reward system, so vulnerability to relapse from abstinence is hypothesised to occur. As a result, drug use continues in an attempt to avoid the symptoms that follow if drug use stops (Koob & Lemoal, 1997:52). Addiction can be seen as disease. A bacterium infects some people but not all; there are differing degrees of relative immunity. An infectious disease is readily spread by those who catch it so is this comparable to addiction: is it primarily new users who transmit the behaviour to their peers? Or does the disease work on a much more intrinsic level? ...read more.

In a study done on genetic and environmental contributions to alcohol abuse and dependence in a population-based sample of male twins, it was found that genetic factors played a major role in the development of alcoholism. This study also concluded that environmental factors shared by family members appear to have had little influence on the development of alcoholism in males. (Prescott & Kendler1999:40) There have been a number of approaches to explain addiction and each area of explanation has been supported by some empirical evidence. These different areas remain to be integrated into a more comprehensive model of addiction. Currently the biopsychosocial model of addiction (and causes of addictive behaviour) forms the basis of treatment (Marlatt & VandenBos, 1997) so one would assume that it is the most accepted. In comparison to the disease model it views addiction as a complicated behaviour pattern having sociological, biological, psychological and behavioural components. These include the experience of craving, short term satisfaction at the risk of long term damage, erratic change in psychological and physical states. Addictive behaviour is distinguished from other behaviours by the individual's pathological, overwhelming involvement in drug use, the desire to continue use and lack of control. It is therefore hard to see it in terms of a habit. ...read more.