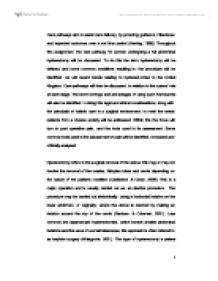 Discuss the care pathway of an adult patient who has undergone a surgical /acute procedure. Critically examine one aspect of this pathway.

Care pathways aim to assist care delivery, by providing guidance, milestones and expected outcomes over a set time period (Herring, 1999). Throughout this assignment, the care pathway for women undergoing a full abdominal hysterectomy will be discussed. To do this the term hysterectomy will be defined, and some common conditions resulting in the procedure will be identified. As will recent trends relating to hysterectomies in the United Kingdom. Care pathways will then be discussed, in relation to the nurses' role at each stage. The short comings and advantages of using such frameworks will also be identified. In doing this legal and ethical considerations, along with the principals of holistic care in a surgical environment, to meet the needs patients from a diverse society will be addressed. Within this the focus will turn to post operative pain, and the tools used in its assessment. Some common tools used in the assessment of pain will be identified, compared and critically analysed. Hysterectomy refers to the surgical removal of the uterus; this may or may not involve the removal of the ovaries, fallopian tubes and cervix depending on the nature of the patients condition (Castledine & Close, 2006). This is a major operation and is usually carried out as an elective procedure. The procedure may be carried out abdominally, using a horizontal incision on the lower abdomen, or vaginally, where the uterus is reached by making an incision around the top of the cervix (Santoso & Coleman, 2001). Less common are laparoscopic hysterectomies, which involve smaller abdominal incisions and the uses of a small telescopes, this approach is often referred to as keyhole surgery (Walsgrove, 2001). The type of hysterectomy a patient receives is often determined by the condition. There are a number of conditions that may result in a patient requiring a hysterectomy including, gynaecological cancers, fibroids which are benign tumours, endometriosis an inflammatory condition, painful and heavy bleeding, uterine prolapse caused by weakening of the muscle and ligaments, allowing the uterus to move into the vaginal canal and pelvic inflammatory disease a long lasting chronic infection (Tortora & Derrickson, 2006). ...read more.

Before pain can be appropriately managed it must first be assessed. As pain is subjective it assessment is not always easy and there are many factors that may affect an individual's perception and expression of pain such as culture, past experiences, gender, age and emotional state (Turk & Melzack, 2001). There are many definitions of pain but the one that is perhaps most apt for nurses is, "pain is whatever the experiencing person says it is, existing whenever the experiencing person says it does" (McCaffery, 1979, p11). There are many pain assessment tools available to aid nurses in the assessment of pain; such tools also allow for pain and interventions taken to manage pain to be documented (Schofield, 2007). Pain assessment tool can be categorised in to unidimensional and multidimensional. Unidimensional tools include the Verbal rating score (VRS), which works by patients describing their pain using a pre set list that reflects pain intensity. The VRS is quick and easy to use but, has been criticised for offering too few descriptors for patient to choose from (Shorten, 2006). Furthermore a comprehensive command of the English language is required, meaning that it may be unsuitable for patients that do not have English as their first language (Hatfield & Tronson, 2001). An alternative to this is the Visual Analogy scale (VAS), when using the VAS patients' are asked to indicate where their pain would fall on a 10cm line with zero being "no pain" (Manly & Bellman, 2002). The VAS dose offer significantly more choice to patients and allows slight changes in pain intensity to be monitored (Davey & Ince, 2000). However, this method of pain assessment may be difficult for some patients to comprehend, it is also inappropriate for patients with visual or perceptual motor problems (Wall & Melzack, 1999). Similar to the VAS is the Numerical rating scale (NRS), one of the simplest and most widely used tools available. ...read more.