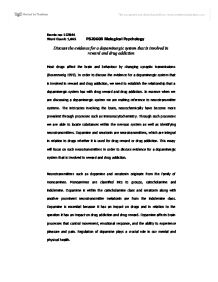 Discuss the evidence for a dopaminergic system that is involved in reward and drug addiction.

(Kalat:66). Drugs such amphetamines and cocaine are important as it will provide evidence for the relationship between drugs and the dopaminergic system. Amphetamines stimulate the dopamine synapses by increasing the activity of dopamine from the presynaptic terminal as the terminal allows it to reabsorb the dopamine after its release (Giros et al 1996). Cocaine has a different effect on dopamine levels as it blocks this reabsorbing of dopamine thus prolonging the effects. Although the effects are temporary the drugs will actually increase the level of dopamine accumulated in the synaptic cleft. Drugs such as Amphetamines and cocaine are all self-stimulated drugs. To support the idea of increasing and decreasing the levels of dopamine, Olds and Milner carried out an experiment involving the use of rats. The experiment on rats was conducted in Skinner boxes, with electric levers for stimulation. The stimulation acted as a reinforcement measure. Olds and Milner found that the rats worked very hard in order to stimulate themselves, as much as 2000 times an hour till the rats faced exhaustion. Olds in particular believed that the rats kept on administering the stimulations because it triggered areas of limbic system to stimulate. Olds Milner conducted further experiments and found that the stimulations were in fact took place in axons which release dopamine. This does suggest some evidence of drug use whether it is on a reward or addiction purposes with a dopaminergic system. There also needs to be a distinction between the different types of drugs. ...read more.

The fact that GABA and glutamate are so widely present makes it likely that they will be altered during drug addiction. This also makes it difficult to treat addiction with drug therapy without causing side effects. So as well as dopamine, other neurotransmitters interact with drugs thus proving more evidence of a dopaminergic system that involves drug reward and addiction. Drugs can interfere with just about every step in the work of neurotransmitter. Each receptor is designed to bind only a certain neurotransmitter. A way to illustrate the discussion could be that the drug acts like a key and if it is structurally similar to the neurotransmitter then it will fit the receptor, which acts as the lock. In this way drugs can damage your intellectual property by blocking nerve impulses, preventing neurotransmitters from getting where they are supposed to be, or producing too many or too little neurotransmitters. As a result, neurons may be over stimulated or not stimulated at all, crippling the nervous system's ability to carry out its functions. There has been plenty of evidence to suggest a dopaminergic system involving drug abuse and reward. Dopaminergic agonists such as cocaine have shown us that through drug use, there is an increase of dopamine, which is brought on by the sensation felt by the drug. It is essential that we remember that the relationship between drugs and a dopaminergic system is reversible but there is substantial evidence to suggest that drug usage has an effect with a dopaminergic system which is useful in explaining the use of drugs to reward and drug addiction. ...read more.