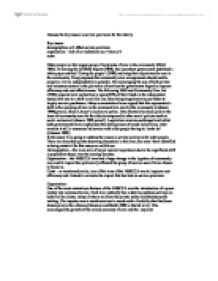 Discuss the key issues in service provision for the elderly

Discuss the key issues in service provision for the elderly Key issues: demographics will effect service provision organisation - lack of co-ordination see Victor p 9 costs Older people are the largest group of recipients of care in the community (BMA 1992). Following the Griffiths Report (1988), the incumbent government published a white paper entitled 'Caring for people' (1989) outlining their objectives for care in the community. They proposed that community care arrangements should enable people to live as independently as possible. ...read more.

Since Labour's election to power, little attention has been paid to the issue of community care for the elderly compared to other social policies such as social exclusion (Johnson 1999 powell). Legislation remains unchanged and whilst both governments have emphasised the development of needs-led services, what remains is still a resources-led service with older people having to 'make do' (Johnson 1999). In this essay I am going to address the issues in service provision for older people. There are many key points deserving discussion in this area; the ones I have identified as being material for this essay are as follows: Demographics - this is an area of major current importance due to the significant shift in population shape over the coming decades. ...read more.

Costs - as mentioned earlier, one of the aims of the NHSCCA was to improve cost efficiency and I intend to evaluate the impact this has had on service provision. Organisation: One of the most contentious features of the NHSCCA was the introduction of a quasi-market into community care. Each local authority has a duty to purchase services on behalf of its clients, many of whom are from the private sector and thereby profit making. The impetus was to match services to needs with a flexibility that had been absent prior to the reforms (Mannion and Smith 1998 in Barlett et al). This encouraged the growth of the mixed economy of care and the capacity ...read more.