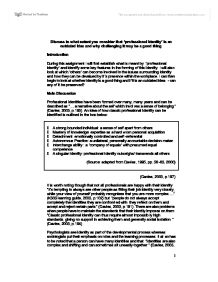 During this assignment I will first establish what is meant by ‘professional identity’ and identify some key features in the forming of this identity. I will also look at which ‘others’ can become involved in the issues surrounding identity and how they can be devalued by it’s presence within the workplace. I can then begin to look at whether identity is a good thing and if it is an outdated idea - can any of it be preserved?

Professional identities have been formed over many, many years and can be described as “… a narrative about the self which involves a sense of belonging” (Davies, 2003, p.193). An idea of how classic professional identity can be identified is outlined in the box below:

It is worth noting though that not all professionals are happy with their identity “It’s tempting to always see other people as fitting their job identity very closely, while your view of yourself probably recognises that you are more complex…” (K303 learning guide, 2003, p.102) but “people do not always accept completely the identities they are confronted with: they reflect on them and accept and reject certain parts” (Davies, 2003, p.191). There are also problems when people have to maintain the standards that their identity imposes on them “Classic professional identity can thus require almost impossibly high standards, giving no support in achieving them and generally social isolation” (Davies, 2003, p.194)

Psychologists see identity as part of the developmental process whereas sociologists put their emphasis on roles and the learning processes. It also has to be noted that a person can have many identities and that “identities are also complex and shifting and can sometimes sit uneasily together” (Davies, 2003, p.190)

A good example of professional identity in practice is to look at the role of a doctor. In relation to the box above doctors tend to have these traits and the title of ‘doctor’ immediately summons up thoughts of such a person when the general public think of them. Back in the 1960’s wards in hospitals were regularly managed by ‘hospital secretary’s’ who appeared to have a lowly position when placed against the ‘professional doctor’. This was why the NHS was often referred to as a “bureaucratic-professional alliance” (Davies, 2003,  p.198), this meant that if you had become a ‘professional’ i.e. a doctor you were dominant within the NHS.

What are the key features in forming professional identity? It seems that training plays a big part in this “Instilling that calm and confident demeanour, creating a sense of identity as a professional that overrides other identities, is one part of what long years of training are designed to achieve” (Davies, 2003, p.194). It does seem that at the heart of professionalism, even today, is expertise. We, the general public appear to have the utmost respect and belief in those that have trained and worked hard to achieve their professional identity, as in the case of doctors.

However, does this mean that we can discount those ‘others’ who have not spent four years at university and achieved their doctorate? Although professional identity can instil confidence in the public “…it can also easily shade into arrogance and into down grading the contribution of others”. (Davies, 2003, p.194). Back in the 60’s Nurses and Hospital Secretary’s would have often felt like incompetent, invisible or unnecessary others. Often the unnecessary others would have been seen as people who had not ‘made it’ or did not have a ‘commitment’ to the profession. Logic tells us that for every identity there is an ‘other’ for example for every doctor there is a patient and for every father there is a child “Classic professional identity calls forth and requires an incompetent other, not active but reactive, not knowledgeable but ignorant, vulnerable, needy, grateful perhaps…”. (Davies, 2003, p.195). “There is a them and us message in identity… the ‘other is the devalued other”. (Davies, 2003, p.191).

It is well documented that professional identity “…overvalues expertise, awarding respect, autonomy and trust” (Davies, 2003, p.197) whilst it “…undervalues the contribution of clients, colleagues and managers” (Davies, 2003, p.197). In modern times the overvaluing of professionals has been the identities downfall. All too often we hear of ‘professionals’ abusing their positions, as in the case of Harold Shipman (see appendix one). “The trust that has been put in the professionals, the high hopes that they are somehow apart from the rest of us, able to solve individual and societal problems, now seems misplaced” (Davies, 2003, p.193) It is wildly acknowledged that the title of Doctor and the professional identity that the title brought with it resulted in misplaced trust in Mr Shipman, ending in the deaths of many, many patients. ‘Others’, such as an Undertaker (Mr Massey) had questioned the then doctor about some of the deaths after becoming somewhat suspicious, the reporter writes “..the good doctor's response was so calm and reassuring that Mr Massey dropped the matter” (Summers, 2004). Mr Shipman had used his professional identity, and his own belief in it, to good effect here. Even the judge at his trial was astonished by the misuse of his professional identity and said "You took advantage of, and grossly abused their trust. You were, after all, each victim's doctor. I have little doubt that each of your victims smiled and thanked you as she submitted to your deadly ministrations." (Summers, 2004)

Losing trust and respect has not been the only issue to lead to professional identity becoming out-dated. “The declining faith in professional expertise led to what Friedson calls a loss of ideological monopoly which allowed a profession to dominate policy and lay perceptions of problems and supposed solutions” (Foster and Wilding, 2003, p. 206.) Politicians began taking a bigger interest in monopolies and control of laws and policy which affected their public. “The Thatcher aim was to bring welfare professionals firmly under political and managerial control, to enhance consumer power to induce greater professional responsiveness, to improve efficiency and effectiveness by various strategies” (Foster and Wilding, 2003, p. 206.). By seeing the public as ‘consumers’ with a right to choose professional identity was becoming less important within the newly formed ‘marketplace’.

Class power also became a big issue when discussing professional identity “Radicals argued that professional power was a cloak for class power legitimated by dubious claims of expertise, political neutrality and an ethic of service” (Foster and Wilding, 2003, p. 205). Feminists also had their concerns “feminists meanwhile accused professionals of being bastions of male privilege and patriarchal control”. (Foster and Wilding, 2003, p. 205).

As the media improved and so did the education system the writing was definatly on the wall for the traditional model of profession identity “In the 70’s and 80’s …. the historically taken-for-granted assumptions about the professionals fitted less easily with a more plural, les deferential, more educated and more critical society”. (Foster and Wilding, 2003, p. 204).

To work towards a new professional identity, and one that would fit in modern times it was necessary to think of new concepts. These included an increased democratic way of working and perhaps a more managerial dominance. Audits and quality checks were introduced and service users became more involved. It was noted that professionals could no longer be seen as arbiters of public policy. The leading thoughts on the changes came from ideas such as this “Professional work is essentially about focusing on the whole person - it is human-centred rather than task and competency centred”. (Foster and Wilding, 2003, p. 208).

Although some work has been done to move on, those working in social care should consider the following when working towards a new identity:

These suggestions preserve some aspects of the old model but in a role of lesser importance. Old and new needs to be balanced correctly for professional identity to be preserved.

Throughout this assignment we have seen examples of professional identity being outdated. This is mainly due to reasons associated with trust and politics. However, the one main aspect that needs constant challenging is that the old model devalues the contribution of so many others who are valuable in a human-centred, modern approach.

We should continue to be aware of professional identities, especially in the social care field and challenging them and coming up with new concepts should be a regular occurrence. We should also remember that trust, respect and professionalism should be earnt over time and not be attached to a title.

“Identities can be dislodged and overturned. They are never finished products but always subject to revision and change”. (Davies, 2003, p.190)