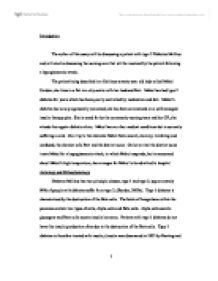 Introduction The author of this essay will be discussing a patient with type 2 Diabetes Mellitus and will also be discussing the nursing care that will be received by the patient following a hypoglycaemic attack. The patient being described is a fictitious seventy year old lady called Mabel Gordon; she lives in a flat in a city centre with her husband Bert. Mabel has had type 2 diabetes for years which has been poorly controlled by medication and diet. Mabel's diabetes has now progressively worsened; she has been commenced on a self-managed insulin therapy plan. She is cared for by the community nursing team and her GP; she attends the regular diabetic clinic. Mabel has no other medical conditions but is currently suffering a cold. On a trip to the chemists Mabel feels unwell, clammy, trembling and confused; the chemist calls Bert and the district nurse. On her arrival the district nurse treats Mabel for a hypoglycaemic attack, to which Mabel responds, but is concerned about Mabel's high temperature, she arranges for Mabel to be admitted to hospital. Aetiology and Pathophysiology Diabetes Mellitus has two principle classes, type 1 and type 2; approximately 90% of people with diabetes suffer from type 2, (Burden, 2003a). Type 1 diabetes is characterised by the destruction of the Beta cells. The Islets of Langerhans within the pancreas contain two types of cells, Alpha cells and Beta cells. Alpha cells secrete glucagons and Beta cells secrete insulin hormone. Patients with type 1 diabetes do not have this insulin production often due to the destruction of the Beta cells. Type 1 diabetes is therefore treated with insulin, (insulin was discovered in 1922 by Banting and Best). ...read more.

During Mabel's hypoglycaemic attack she may not have effective communication due to the neuroglycopenic symptoms of slurred speech and tingling around the lips, (Alexander et al, 2002). Also her confusion and her environment may lead her to have feelings of embarrassment and a loss of self confidence. During her admission to and stay in hospital Mabel may feel vulnerable, worried and confused; this could lead to unwillingness to communicate with staff and other patients, (Roper et al, 1996). Breathing The majority of people are independent in breathing from birth to death, (Roper et al, 1996). Mabel would usually be independent with her breathing however when she has the hypoglycaemic attack her breathing may be disturbed. The district nurse would monitor Mabel's respirations, pulse, temperature and blood pressure. If Mabel had not received immediate treatment from the district nurse she may have become unconscious and her breathing would have become shallow. Once in hospital Mabel's respirations should be monitored, her position in bed should be suited to her comfort and if sat upright her breathing should not trouble her. Eating and Drinking Until recently Mabel's diabetes had been controlled by diet and medication however this was no longer giving sufficient control and she was commenced on insulin. Recently Mabel has been unwell and her dietary intake has been poor with skipped meals, this was the main cause of her hypoglycaemic attack. The district nurse would carry out a blood sugar analysis and would recognise a low blood sugar level; the district nurse would then need to administer a quick acting carbohydrate. Things such as sugary sweets or drinks can be used as well as hypostop. ...read more.

These will facilitate and ensure a common standard of care and provide guidance to the various support services available, (Grampian Diabetes Integrated Care Steering Group, 2000). As previously discussed 80% of type 2 diabetes sufferers are overweight. The initial control of diabetes through diet and exercise is paramount. Health professionals can give advice on this and there are many health initiatives run throughout the country to help. Two local initiatives are the Food co-op Network North-east and the Walk to Health. The food co-op network provides fresh fruit, vegetables and other healthy foods. The aim is to supply these foods to people at reasonable prices to promote and encourage healthy eating. The Walk to Health initiative is run from many hospitals and health centres. Patients are given packs containing maps of pre-planned routes between 1-8 miles long, the walks are safe and many can accommodate prams and pushchairs. They also give advice on safety and levels of fitness and have a diary for people to record their progress, (Health Promotions, 2003). All health professionals should be aware of such initiatives run in their area so they can help and encourage their patients to participate and improve their health. Appendix Appendix 1: Roper, Logan and Tierney Activities of Living Model 1: Maintaining a Safe Environment 2: Communicating 3: Breathing 4: Eating and Drinking 5: Eliminating 6: Personal Cleansing and Dressing 7: Controlling Body Temperature 8: Mobilizing 9: Working and Playing 10: Expressing Sexuality 11: Sleeping 12: Dying (Roper, Logan, and Tierney, 1996, p35) Appendix 2: Seven first stage priorities: � Patient information, Education and Empowerment. � Heart Disease. � Eye Care. � Strategy, Leadership and team working. � Education and Training for Professionals. � IM & T and Diabetes Registers. � Implementation and Monitoring. ...read more.