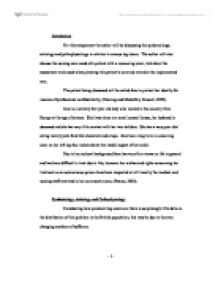 Discussing the epidemiology, aetiology and pathophysiology in relation to venous leg ulcers.

Introduction For this assignment the author will be discussing the epidemiology, aetiology and pathophysiology in relation to venous leg ulcers. The author will also discuss the nursing care needs of a patient with a venous leg ulcer, talk about the assessment tools used when planning this patient's care and rationale the implemented care. The patient being discussed will be called Jane to protect her identity for reasons of professional confidentiality, (Nursing and Midwifery Council, 2002). Jane is a seventy five year old lady who moved to this country from Europe at the age of sixteen. She lives alone in a small council house, her husband is deceased and she has very little contact with her two children. She has a very poor diet eating mainly junk food like chocolate and crisps. Jane has a long term re-occurring ulcer on her left leg four inches above the medial aspect of her ankle. Due to her cultural background Jane has very firm views on life in general and has been difficult to treat due to this, however her wishes and rights concerning her treatment as an autonomous person have been respected at all times by the medical and nursing staff involved in her community care, (Pearce, 2002). Epidemiology, Aetiology and Pathophysiology Considering how prevalent leg ulcers are there is surprisingly little data on the distribution of this problem in the British population, this may be due to the ever changing numbers of sufferers. Various individual heath care trusts have carried out audits. In Grampian an audit was carried out within the Moray area by the Local Health Care Co-operative (LHCC) to collect data on leg ulcer management however they found their results to be inconclusive and are planning a new audit for next year. ...read more.

The hand held probe reflects sound waves off the moving red blood cells; the reflected waves are picked up by the probe and create an audible sound. The signal given off represents the blood flow through the vessel. The Doppler ultrasound measures the ankle and brachial pressure indices (ABPI's). If used correctly the Doppler ultrasound can be an essential part of holistic assessment. To calculate the ABPI for each leg the highest ankle systolic pressure of each leg is divided by the higher of the two brachial pressures, (appendix 3), (Davies, 2001). The SIGN guidelines say that a patient with an ABPI of <0.8 should be assumed to have arterial disease and an ABPI of >0.8 should be classed as venous insufficiency, (SIGN, 1998). Unfortunately despite the Doppler assessment being fully explained to Jane and giving her plenty of reassurance she only allowed one leg to be Dopplered and refused the assessment to be completed. The results of Jane's assessment were therefore inconclusive. The result from one leg pointed towards venous insufficiency however as the test was incomplete no diagnosis could be made. The SIGN guidelines recommend compression therapy for people with a Doppler score of >0.8 however compression is contraindicated for people <0.8, (SIGN, 1998). The new dressing routine was monitored closely and appeared to be working in the intended way. The iodine paste called Iodoflex is relatively new, its therapeutic indications were the reduction of bacteria in wounds and the reduction of pain and accelerated healing in chronic leg ulcers. It also absorbs exudate on contact and removes pus and debris from wounds, (Smith and Nephew, 2003). The new dressings began to make an improvement towards healing, with gentle persuasion Jane agreed to have her dressings changed three times per week and her ulcer was continually assessed using the wound assessment chart. ...read more.

The first visit to Jane by the Community nurse gave the impression that it was going to be a daunting task trying to heal her ulcer and help her with her nutrition. Jane's wishes regarding treatment were respected at all times and she was never pressured into treatment she did not want. Once she had settled into her new home and got to know the nursing team Jane became more open and talked about her life, this helped provide a good ground for a successful professional relationship that she could benefit from. Jane's leg ulcer began to make good healing progress and although her diet is not 100% healthy she now has in place the support and care she needs to help maintain a reasonable diet and lifestyle. References Davies, C., 2001. Use of Doppler Ultrasound in Leg Ulcer Assessment. Nursing Standard. [online]. 15(44), Available from: http://gateway2.uk.ovid.com/ovidweb.cgi [Accessed 13 October 2003] Dealey, C. (1999). The Care of Wounds: A Guide for Nurses. 2nd ed. Oxford: Blackwell Science Limited. pp. 118 & 119. Grampian Primary Care NHS Trust. (2000). Strive for Five to Stay Alive. Aberdeen: Grampian Primary Care NHS Trust. Health Education Board for Scotland. (2000). Eating for Health. Scotland: Health Education Board for Scotland Naidoo, J. and Wills, J. (2000). Health Promotion: Foundations for Practice. 2nd ed. Edinburgh: Bailli�re Tindall. pp. 231-233. Nursing and Midwifery Council. (2002). Code of Professional Conduct. London: Nursing and Midwifery Council. pp.4 & 7 Office for National Statistics, 2000. General Household Survey. [online]. Office for National Statistics. Available from: http://www.statistics.gov.uk/STATBASE/ssdataset.asp?vlnk=3520 [Accessed 29 October 2003] Pearce, L., 2002. A Patients Right to Choose. Nursing Standard. [online]. 16(45), Available from: http://gateway2.uk.ovid.com/ovidweb.cgi [Accessed 13 October 2003] Porth, C.M. (2002). Pathophysiology: Concepts of Altered Health States. 6th ed. Philadelphia: Lippincott Williams & Wilkins. pp. 448 & 449 Scottish Executive, 2000. Joint Future Group. [online]. Scottish Executive. Available from: http://www.scotland.gov.uk/library3/social/rjfg.01. ...read more.