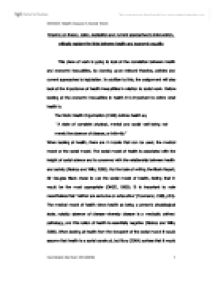 Drawing on theory, policy, legislation and current approaches to intervention, critically explore the links between health and economic equality

Drawing on theory, policy, legislation and current approaches to intervention, critically explore the links between health and economic equality

“A state of complete physical, mental and social well-being not merely the absence of disease, or infirmity”

When looking at health, there are 2 models that can be used; the medical model or the social model. The social model of health is associated with the insight of social science and is concerned with the relationship between health and society (Naidoo and Wills, 2000). For the task of writing the Black Report, Sir Douglas Black chose to use the social model of health, feeling that it would be the most appropriate (DHSS, 1980). It is important to note nevertheless that ‘neither are exclusive or exhaustive’ (Townsend, 1988, p34). The medical model of health views health as being a person’s physiological state, notably absence of disease whereby disease is a medically defined pathology, and this notion of health is essentially negative (Naidoo and Wills, 2000). When looking at health from the viewpoint of the social model it would assume that health is a social construct, but Bury (2004) advises that it would be too simplistic to think of health as being a purely social construct but that health depends on changing social environments.

There are many socio-economic determinants of health including age, race, disability, gender and ultimately class (Naidoo and Wills, 2000). Shaw et al (1999) state that illness is more likely to be experienced by children in poorer families. When looking at inequalities that relate to age it is apparent that elderly people are more at risk of death than any other group in society, and poverty only ‘exacerbates this situation’ (Arber and Ginn, 1993, p38). Arber et al (2003) advise that pensioners in the lower social classes are more susceptible to illness and disability, which results in poor pensioners dying at a younger age than those who are more upwardly mobile. It becomes apparent that although age affects inequalities in health it is also greatly affected by social class (Naidoo and Wills, 2000).

‘a strikingly high mortality rate from hypertension and strokes among those from the Caribbean’ (Naidoo and Wills, 2000, p38).

In addition to this there is a higher likelihood of people born in South Asia dying from ischaemic heart disease (Naidoo and Wills, 2000). Another significant inequality is that people from black and ethnic minority groups are more likely to be perceived as suffering from a mental illness because of their cultural differences (Naidoo and Wills, 2000). Although there are several explanations for inequalities in health being determined by race, Wilkinson (1996) informs us that research conducted in the United States has indicated that racial differences in health are

‘accounted for by differences in people’s social and economic circumstances’ (p61).

The findings of a recent study conducted by the Joseph Rowntree Foundation (2007) state that,

‘there are stark differences in poverty rates according to ethnic group. Risks of poverty are highest for Bangladeshi’s, Pakistani’s and Black African’s, but are also above average for Carribean, Indian and Chinese people’ (p1).

Being sick and/or disabled is often associated with high levels of poverty and deprivation (Shaw et al, 1999). Because the disabled have a low income due to inability to work, this results in them living in poor housing and becoming poverty stricken (Naidoo and Wills, 2000). Because of their environments and living conditions the disabled inevitably become ill, and their environment and living conditions are contributing factors to why the ill health that they suffer often persists (Shaw et al, 1999). Shaw et al (1999) also herald that if living conditions can be improved for those suffering from long-term sickness or disability then health inequalities may be reduced. Social selection explanations suggest that it is health that determines social class rather than class determining health, as those who are healthy will ‘experience upwards social mobility’ (p36) which raises the death rates and levels of illnesses and disability within the lower classes as the unhealthy are pushed down the social scale (Naidoo and Wills, 1994).

There are several proposed explanations for the differences in morbidity between men and women. It has been suggested by Naidoo and Wills (1994) that women use health care services more frequently than men as they are less likely to be in full time employment which means they have more time to visit their GP over their ailments. On the other hand it has also been considered that women gain a ‘protective effect from oestrogen’ (Naidoo and Wills, 2000, p32) which makes them less prone to infection and results in mortality rates among women being lower. Statistics show that women live 6 years longer than men on average, however they account for 65% of spending within the NHS (Naidoo and Wills, 2000). Feminists believe that patriarchy contributes to the negative health experiences that women endure which is a result of the dual burden they suffer in society (Cree, 2000). Although there is an obvious difference in health experiences between men and women it is also noted that although women suffer worse health than men their health is also affected by their class,

‘Whereby women in higher social classes have better health than those in lower classes’ (Naidoo and Wills, 2000, p32).

After critically exploring the inequalities in health that are related to age, disability, race and gender it becomes apparent that class is the most dominant determinant of them all. There are many studies that have shown that it is not just the poorest in society that suffer from poor health but that inequalities,

‘Run right across society with every level in the social hierarchy having worse health than the one above it’ (Wilkinson, 1996, p53).

‘Upwardly mobile are found to have better health than those in lower classes’ (p105).

In contrast to this theory there has been a study that suggested that the poorer people are favoured by the NHS when they distribute healthcare, even when their frequency of ill-health has been taken into account (O’Donnell et al, 1989, cited in Wilkinson, 1996). Naidoo and Wills (2000) argue that it is the way in which class and health are measured that result in the ‘widening gap in mortality figures between social classes’ (p35) and that this perception is not real. This is known as the artefact explanation and,

‘A considerable amount of research supports the view that the relationship is a real phenomena and not merely an artefact of the data’ (p35).

It is important not only to explore the socio-economic determinants of health when looking at economic inequalities in health but also to look at legislation and policies that have been proposed and/or implemented to try to eradicate these inequalities.

The Black Report was produced by a working group, whose most influential member was Peter Townsend (then a Professor of Sociology at Essex University) to assemble information about the difference in health status among the social classes and the factors that possibly contribute to these differences (Whitehead, 1988).The findings were produced as Inequalities in Health: Report of a Research working Group (DHSS, 1980). The working group then made a series of recommendations for reducing the inequalities, in particular emphasising the importance of factors other than the NHS (Townsend, 1988).The Thatcher Government was not persuaded by the analysis or the recommendations of the Black Report and it took a further 20 years for it to be taken seriously by policy makers (Ham, 2004). Adams (2002) states that,

‘the Black Report shows there persistence of social class and geographical inequalities in health provision and people’s health as measured by rates of accidents, morbidity (illness) and mortality’

The rejection of the Black Report by the Conservative Government stands in direct contrast to the willingness of a Labour Government to change the principles of NHS resource allocation when enlightened about the continuing inequalities in budget distribution amongst regions within Britain (Ham, 2004).

Margaret Whitehead was commissioned in January 1986 to update the evidence of inequalities in health which had accumulated since 1980 and to assess the progress of the recommendations made in the Black Report; the finding were produced as The Health Divide (Whitehead, 1988).  The proposals of the Health Divide were again rejected by the Conservative Government, who gave the reasoning that it would be too expensive to implement (Whitehead, 1988).

The Acheson Report 1998 was commissioned by the Government to update the findings of the Black Report and particularly to advice on priorities for policy development (Ham, 2004). In doing so the Acheson Report highlighted the importance of reducing poverty, improving education, increasing work opportunities and strengthening access to housing, and it also noted that the NHS should be more pro-active to ill-health and premature mortality than reactive (Ham, 2004). The proposals of the Acheson Report highlighted the need for the NHS to work in partnership with other agencies and the need to ensure equitable access to effective health care and also echoed the Black Report in stating that the health of families and children must be improved (Ham, 2004).

‘the Labour government came into power in 1997 with a commitment to tackle health inequalities, and offered a ‘third way’ with regard to policies on health’ (p183)

The first paper issued by Tony Blair was Our Healthier Nation: A contract for Health which he issued shortly after coming into office (DoH, 1998). Ham (2004) heralds that this paper put a greater emphasis on the social, economic and environmental causes of illness, and was aware of the importance of inequalities in health. There were 2 aims of the health strategy,

‘We are engaged in the most ambitious healthcare improvement programme anywhere in the world’ (NHS, 2003)

‘Evidence-based assessment of the long-term resource requirements for the NHS’ (HM Treasury, 2002).

The results of the report were that over the next 20 years more resources need to be devoted to delivering healthcare and reforms must be implemented to ensure that ‘resources are used effectively’ (HM Treasury, 2002).

When Tackling Health Inequalities: Status Report on the Programme for Action was produced in 2002 its aims were to reduce the outcomes of health inequalities by 10% by 2010, and this was to be measured by life expectancy at birth and infant mortality (DoH, 2005). The Department of Health has dedicated a Health Inequalities Unit in order to address the Public service Agreement targets as detailed by the Status Report 2002 (DoH, 2005).

Health inequalities are important in the field of social work as the majority of service users are from poorer backgrounds which are highlighted as suffering from the greatest inequalities in health (Naidoo and Wills, 2000). Tones and Tilford (1994) herald that

Service users in the social work field often fall into this category. McLeod and Bywaters (2002) advise us that social work can contribute to ‘creating greater equality in physical health’ (p1) in ‘its own right’ (p1). The importance of both formal and informal networks has been highlighted by the World Health Organization

In conclusion it becomes apparent that although there are a number of social determinants that impact upon inequalities in health it is the economic equalities that are the most significant. It also becomes evident that,

Department of Health (1998) Our Healthier Nation: A Contract for Health. London; The Stationary Office

Platt, L. (2007) Poverty and Ethnicity in the UK. London; The Policy Press