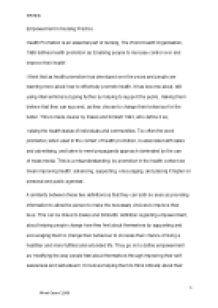 Empowerment in Nursing Practice. The relationship between empowerment and health promotion is discussed in the World Health Organisation Health Report by Nutbeam, 1998

﻿5957036 Empowerment in Nursing Practice Health Promotion is an essential part of nursing, The World Health Organisation, 1986 defines health promotion as ?Enabling people to increase control over and improve their health?. I think that as health promotion has developed over the years and people are learning more about how to effectively promote health, it has become about, still using interventions but going further by helping to support the public, making them believe that they can succeed, as they choose to change their behaviour for the better. This is made clearer by Ewles and Simnett 1993, who define it as; ?raising the health status of individuals and communities. Too often the word promotion, when used in the context of health promotion, is associated with sales and advertising, and taken to ment propaganda approach dominated by the use of mass media. This is a misunderstanding: by promotion in the health context we mean improving health: advancing, supporting, encouraging, and placing it higher on personal and public agendas?. A similarity between these two definitions is that they can both be seen as providing information to allow the person to make the necessary choices to improve their lives. ...read more.

Societal Change - I aim to change both the views and the behaviour of society as a whole. Changing the behavioural pattern and making the promotion of non-smoking a societal norm. This approach links in with the Stages of Change Model by Prochaska and DiClemente (cited in Ewles, 2005). The model looks at the beneficial change in behaviour for the client but it also takes into consideration encouraging change in addictive behaviours by going through a process of stages. They describe people going from ?precontemplation? into four stages of change: contemplation, preparation, action and maintenance including the regular occurrence of ?relapse? when the person reverts back to old ways. I felt this model would be an excellent basis for my artefact because it shows that any change in behaviour that a client makes is not an ending but one of a whole series. It shows that it is hard to quit an addiction that it is acceptable to relapse and try again. My artefact links into two aspects of this model, Precontemplation because smokers probably won?t be thinking about giving up but the poster may make them start to think about it. ...read more.