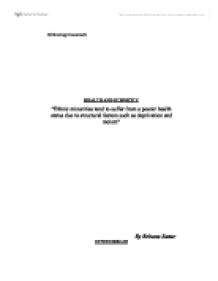 &quot;Ethnic minorities tend to suffer from a poorer health status due to structural factors such as deprivation and racism&quot;

(398 words) MAIN RESEARCH METHOD AND REASONS The principal research method, which will be used, is a questionnaire, containing mainly closed-ended questions, focussing on what is being studied. This will allow answers to be related closely to the investigation. The advantages are that it is quick, simple, and data is easy to summarise. The disadvantage is that it may not be valid therefore some open-ended questions will be included where the response will be left open for respondents to answer in the way they like. Questionnaires should hopefully allow me to identify clear trends within the sample group and offer possible explanations. My sample will consist of forty students from my sixth form who will be chosen randomly. Students from different ethnic minorities will be approached as well as white students, which is vital to my own study. Random selection will enable me to obtain a good balance of ethnic backgrounds. Twenty 16-18 year old males and twenty 16-18year old females will be used. A questionnaire will also offer the opportunity to include not only the concept of racism but also my other concept of unemployment rate where respondents will be asked to give the occupation of the highest wage earner in their family. ...read more.

A second, crucial problem is the choice of my sample group. Just taking a group of students from my sixth form immediately raises the question of bias. My sample does not include people who didn't carry on education or those at college. Also sixth form includes mainly people who are middle-class, white and well educated, and therefore arising the major issue of whether I will be able to include enough ethnic minorities in my sample. This investigation is based upon ethnic minorities so it is very important for me to carefully select the correct number of people from different ethnic backgrounds. However the reason this sample was chosen is due to practical reasons and because it is more efficient for me to test this sample. The ethical issue involved is that participants won't know exactly what the study is about. Also because questionnaires will be completed in my presence, the problem which may arise here is that respondents may feel pressurised. Also questions are imposed on the respondent, and because of my presence the respondents may reflect my values, rather than their own and give answers which they feel are relevant, rather than true, therefore I will try to keep myself fairly distant. (299 words) (Total: 1198 words) ...read more.