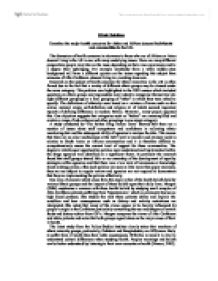 Ethnic Relations Examine the major health concerns for Asian and African descent individuals and communities in the UK. The discussion of health concerns

Ethnic Relations Examine the major health concerns for Asian and African descent individuals and communities in the UK. The discussion of health concerns in relevance to those who are of African or Asian descent living in the UK is one with many underlying issues. There are many different perspectives people may take on the issue depending on their own experiences and to a degree their upbringing. For example somebody from a white middle-class background will have a different opinion on the issues regarding this subject then someone of Afro-Caribbean descent living in a working class area. Research on the subject of health concerns for ethnic minorities in the UK is often flawed due to the fact that a variety of different ethnic groups may be classed under the same category. This problem was highlighted in the 1991 census which included questions on ethnic groups and respondents were asked to categorise themselves into eight different groupings or a final grouping of "other" in which they were asked to specify. The definitions of ethnicity were based on a mixture of terms such as skin colour, national origin, self-definition and religion all of which seemed important aspects of defining difference in modern Britain. However , many people opposed this. One objection suggests that categories such as "Indian" are oversimplified and contain a range of sub-cultures and other groupings in one single category. A study conducted by 'The Bolton Drug Action Team' showed that there are a number of issues about staff competence and confidence in collecting ethnic monitoring data and the subsequent ability of agencies to analyse the data. ...read more.

It did not prove possible to access young South Asian women for interviews or focus groups however, community agency respondents reported increasing experimentation with drugs among young South Asian women and girls who they regarded as particularly vulnerable. Agencies dealing with domestic violence reported increasing drug use among young South Asian women accessing these services and there is little of no contact with drug agencies (Parker, 1995). Respondents reported that there is little preventative education reaching this group on a range of issues such as drug use, sexual health and teenage pregnancy. Respondents also reported low levels of youth service provision targeting young Asian women and girls. There was a general perception that stereotypical assumptions about South Asian young women and girls in particular i.e. they do not use drugs and are not sexually active has resulted in the poor levels of service responses. It is very clear that there is a problem with drug use in these communities. This is a major concern for the health and well being of the individuals in these areas. A lack of initiative in dealing with this problem seems to be the main factor. A lot of assumptions have been made, and what seems to be a lack of understanding of different cultures, languages and backgrounds means that these young people are having trouble relating to the education being provided. As a whole the UK seems to have a lack of understanding as a whole, and it is this lack of knowledge within the country which seems to be the major factor for health concerns faced by Asian and African descent individuals and communities in the UK. ...read more.