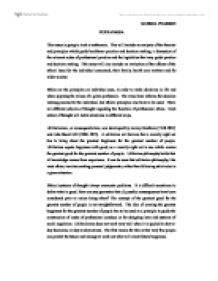 Euthanasia - an analysis of the theories and principles which guide healthcare practice and decision making.

This essay is going to look at euthanasia. This will include an analysis of the theories and principles which guide healthcare practice and decision making, a discussion of the relevant codes of professional practice and the legislation that may guide practice and decision making. This essay will also include an evaluation of the effects of the ethical issue for the individual concerned, their family, health care workers and for wider society. Ethics are the principles on individual uses, in order to make decisions in life and when applying the values of a given profession. The value base informs the decision making process for the individual, but ethical principles also have to be used. There are different schools of thought regarding the function of professional ethics. Each school of thought will tackle situations in different ways. Utilitarianism, or consequentialism, was developed by Jeremy Bentham (1748-1832) and John Stuart Mill (1806-1873). A utilitarian will believe that a morally right act has to bring about the greatest happiness for the greatest number of people. Utilitarians equate happiness with good, so a morally right act is one which creates the greatest good for the greatest number of people. Utilitarian philosophy holds that all knowledge comes from experience. It can be seen that utilitarian philosophy, like most ethics, involves making personal judgements, rather than following strict rules in a given situation. Ethical systems of thought always encounter problems. It is difficult sometimes to define what is good. How can you guarantee that all possible consequences have been considered prior to action being taken? The concept of the greatest good for the greatest number of people is not straightforward. The idea of creating the greatest happiness for the greatest number of people has to be used as a principle to guide the construction of codes of professional conduct, or for designing laws and systems of social regulation. Utilitarianism does not work very well when it is applied to day-to-day decisions, or day-to-day actions. ...read more.

There have been several attempts in recent years to introduce legislation on euthanasia but none has been successful. It is therefore not surprising that various professional bodies have issued comprehensive guidance on the basic moral principles that should guide practice. These cover withholding and withdrawing treatment as well as cardiopulmonary resuscitation. The most important current guidelines are Royal College of Paediatrics and Child Health (1997), General Medical Council (2002) and British Medical Association (2001a, b). Although these guidelines vary in emphasis, several key moral principles emerge, in summary these are: treatment of patients should reflect the dignity of every person, irrespective of age, debility, dependence, race, colour or creed; actions must reflect the needs of the patient as well as their values, beliefs and priorities; life has a natural end; prolonging a patient's life usually, but not always, provides a health benefit to that patient but it is not an appropriate goal of medicine to prolong life at all costs with no regard to its quality or the burdens of treatment; although emotionally it may be easier to withhold treatment than to withdraw it, there is no morally relevant difference between the two actions. There are also some conflicts within the professional code of practice for example, in the Nursing & Midwifery Council Code of Professional Conduct, 3.2 states that 'you must respect patients' and clients' autonomy - their right to decide whether or not to undergo any health care intervention - even where a refusal may result in harm or death to themselves' but in 3.8 it states that 'where treatment is necessary to preserve life, you may provide care without patients' or clients' consent'. The principle of respect for autonomy acknowledges that patients have the right to control their own lives and so can decide when and how to die. This means that competent adults have the right to refuse life saving treatment. ...read more.

Doctors and hospital staff have the advantage of being used to seeing such things and having clinical detachment, friends and family do not. Advances in medical treatments have enabled us to keep people artificially alive, using respirators and methods of artificial feeding. Drugs used to try and control diseases can be very expensive; chemotherapy treatments used in the fight against cancer, for example, cost a great deal of money. There comes a point where these treatments are no longer offering therapeutic benefits, and they are merely prolonging the dying process. If the patient were to request euthanasia such treatments would not be given, thus saving a considerable amount of money. This money could be used to provide resources for people who have a chance of surviving, improving hospital facilities, buying more equipment - it could be used in ways that would save lives. People choosing euthanasia would in fact be helping society. The individual concerned may feel that dying would be the best option, for example, the elderly may feel pressured into requesting euthanasia as they see themselves as being a burden to society or they may have just had enough of the pain and suffering and would not want to go through anymore or for their families to see them go through anymore. In conclusion, euthanasia is a complex issue. There are many pros and cons towards legalising euthanasia, it would give people greater autonomy over their own lives and give terminally ill people a chance to avoid great pain and emotional distress. However, it begins the degradation of the prohibition of murder, and opens up the possibility of further erosion of the system. The death of a person affects the lives of others, often in ways and to an extent which cannot be foreseen. We believe that the issue of euthanasia is one in which the interest of the individual cannot be separated from the interest of society as a whole. ...read more.