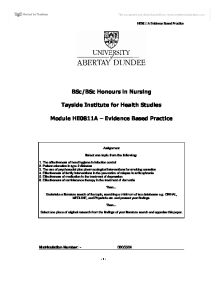 BSc/BSc Honours in Nursing Tayside Institute for Health Studies Module HE0811A - Evidence Based Practice Assignment Select one topic from the following: 1. The effectiveness of hand hygiene in infection control 2. Patient education in type 2 diabetes 3. The use of psychosocial plus pharmacological interventions for smoking cessation 4. Effectiveness of family interventions in the prevention of relapse in schizophrenia 5. Effectiveness of medication in the treatment of depression 6. Effectiveness of reminiscence therapy in the treatment of dementia Then... Undertake a literature search of the topic, searching a minimum of two databases e.g. CINHAL, MEDLINE, and Physcinfo etc. and present your findings. Then... Select one piece of original research from the findings of your literature search and appraise this paper. Matriculation Number: - 0605304 * Introduction There are currently 2.3 million people in the UK with diabetes, and up to 95% of them are type 2 diabetics (Diabetes UK, 2007a). Life expectancy is reduced by up to 10 years in those with this type of disease (Whittaker, 2004); and much of the burden relating to care falls on the individuals themselves (Whittaker, 2004). In the majority of cases, type 2 diabetes is treated with lifestyle changes such as healthier diet, weight loss, and increased physical exercise (Diabetes UK, 2007b); and maintaining blood glucose levels as close to normal as possible slows down the progression of long term complications (Whittaker, 2004). Patient education has been recognised by many (Walsh, 2002. Brooker & Nicol, 2003 and Alexander et al, 2006) as fundamental in the treatment of type 2 diabetes; which is why the topic of patient education in people with this chronic condition has been chosen. * Literature Search Before performing a literature search, a clinical question must first be formulated and the best way to do this is by using the P.I.C.O. framework (Craig, 2007). In this framework the "P" stands for population, the "I" for intervention, the "C" for comparison; and the "O" stands for outcome. ...read more.

The problem with this method is that participants become subject to social desirability bias; where they want to be seen in the best light and do not provide truthful answers in the hope of achieving this (Davey, 2004). For example the participants may have recorded that they had eaten more fruit and vegetables than they actually had, thinking this was a more satisfactory answer. The level of participants' perception must also be considered when using questionnaires. Some outcomes in the study were rated via the use of scales; for example -9 to +9. We must remember that people see things differently, and although one person may rate a particular situation with a low score; another person may rate the exact same situation with a higher score. Was the assignment of the participants randomised? All participants were randomized using permuted blocks, a computerised method that ensures participants are distributed equally between comparison groups. For example, in a study like this one, if two participants had had diabetes for 6 years; then one participant would be allocated to each group. If eight participants had had diabetes for 6 years, then four would be allocated to each group (Cochrane, 2007). Were the groups similar at the start of the trial? Because of the permuted blocks method (mentioned above), both the control and intervention groups were similar at the start of the trial. This was further demonstrated by a table located within the study; that provided information on both the control and intervention groups' age, level of education, employment history and martial status. No significant differences were found confirming similarities between the two groups. Were all the participants properly accounted for? Although not all of the participants completed the study, all of them were accounted for. An "intention to treat" analysis was performed, whereby all the participants who were eligible for the study were analysed irrespective of whether or not they took part in it (Cochrane, 2007). ...read more.

PERT programme and a cost analysis was not possible. However the cost to the individual's well being can be considered. The researcher did mention that there were "no significant improvements" in the "overall quality of life" in the X-PERT group. If this is the case, then participants may loose interest or become disheartened with the programme if they feel the time they have invested does not outweigh the benefits received. Additionally the study states that there was no significant difference between the two groups with respect to the frequency of monitoring blood glucose. The researcher though this was due to "increased confidence with diabetes self management". However this could also have been due to lack of interest by participants towards the end of the trial. On a more positive note, one important point to consider is that of empowerment and confidence. The X-PERT programme puts the patient at the centre of the decision making process helping them to feel "valued" and accepted as "experts at living with diabetes". This is a positive approach and conforms to the governments' strategy "Saving Lives: Our healthier Nation" (DOH, 1999) where public participation is called for to improve health. This supports and increases the reasons for implementation of the study. What else is of interest? Further searches into the X-PERT programme have revealed that it has now been implemented by over 100 local authorities (X-PERT, 2007) giving further credibility. Additionally, this programme has won 4 national awards from institutions such as "Diabetes UK" and the "Secretary of State" increasing the reasons for putting this programme into practice. * Conclusion This paper has highlighted issues to both support and oppose this piece of research. It has shown that although the results were statistically significant, their relative effectiveness may only be small. However the study is relevant in today's practice and conforms to the recommendations as set out by the NSF and NICE. Additionally the study has received various accolades and is already used by many primary care trusts; making this type of programme relevant for use within the local population. ...read more.