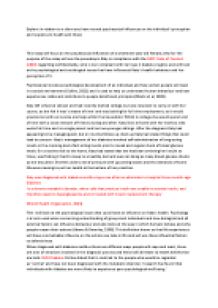 ﻿Explore in relation to a client you have nursed psychosocial influences on the individual?s perception and response to health and illness This essay will focus on the psychosocial influences of a seventeen year old female; who for the purpose of the essay will use the pseudonym Katy in compliance with the NMC Code of Conduct (2008) regarding confidentiality, who is non compliant with her type 1 diabetes regime and will look at the psychological and sociological issues that have influenced Katy?s health behaviour and her perception of it. Psychosocial involves psychological development of an individual and how certain people will react in a social environment (Collins, 2011) and is used to help us understand human behaviour and how experiences relate and contribute to people beliefs and principles (Marks et al, 2002). Katy left school at sixteen and had recently started college, but was reluctant to carry on with her course, as she felt it was ?a waste of time? and was looking for full time employment, as it would provide her with an income and help within the household. Whilst in college she would spend a lot of time with a close network of friends during and after. Katy lives at home with her mother; who works full time and is a single parent and her two younger siblings. After the diagnosis Katy had appearing to be managing well, but on routine follow up check up Katy had stated things that could lead to concern. Katy?s management of her diabetes involved self-administration of long acting insulin in the morning and a fast acting insulin prior to meals and regular check of blood glucose levels. ...read more.

2005), for the adolescent who has diabetes they are more likely to do this as a way of coping (Millstein & Igra, 1995). Decisions made by adolescence will differ from those of an adult; their values will differ on the possible consequences. Esmond (2000) specified that adolescence is a ?time of discoveries and exploration of potentially negative health behaviour.? Research has established that the period of adolescence is related to the disregard of insulin regime, dietary advice and self monitoring of blood glucose levels (Guo et al 2011). This will be advocated by Skinner et al (2000) who had previously found over a year of monitoring adolescents, found a determination of self-management over time. Sociology involves studying people and how they relate with each other, and how society can affect certain behaviour and attitudes held by an individual. Merriam & Webster (2012) define sociology as: ?the science of society, social institution and social relationships; specifically: the systematic study of the development, structure interaction, and collective behaviour of organised groups of human beings? This definition lets us think how humans are sociable beings and certain groups will come together, whether it is through same interests, age or family (Crawford & Brown, 1999). Groups that form will tend to have similar interest and status and will develop their own ?norms? within the group; what is acceptable (Haborn, 2002). The close network of friends Katy has made over the years has influenced her on important decisions she has made regarding her diabetes one of the reasons for this is the stigma attached to people who have diabetes. ...read more.