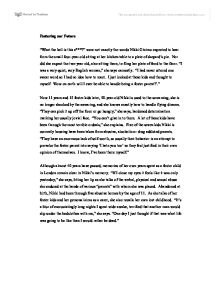 Fostering our Future "What the hell is this s***?" were not exactly the words Nikki Gintrac expected to hear from the small four-year-old sitting at her kitchen table to a plate of shepard's pie. Nor did she expect the two-year old, also sitting there, to fling her plate of food to the floor. "I was a very quiet, very English woman," she says earnestly. "I had never uttered one swear word so I had no idea how to react. I just looked at these kids and thought to myself 'How on earth will I ever be able to handle being a foster parent?'." Now 11 years and 15 foster kids later, 50-year-old Nikki is used to the screaming, she is no longer shocked by the swearing, and she knows exactly how to handle flying dinners. "They can pick it up off the floor or go hungry," she says, hardened determination marking her usually jovial face. "You can't give in to them. A lot of these kids have been through the most terrible ordeals," she explains. Five of the seven kids Nikki is currently housing have been taken from abusive, alcoholic or drug addicted parents. "They have an enormous lack of self-worth, so usually their behavior is an attempt to provoke the foster parent into saying 'I hate you too' so they feel justified in their own opinion of themselves. ...read more.

Nicole agrees admitting frustrated tantrums are far from infrequent. "Nikki helps us laugh about it all though," she says. "Even though I was too young to remember, there's this funny story about me and shepards pie she always tells us." As Nikki's first foster kids, Rebecca and Nicole have seen a further 13 kids arrive, some of who have been transferred and five of which have stayed on to join the family. They both agree that Nikki is a rare find. "She's pretty cool to do all of it," says Nicole. "Most carers wouldn't. I mean I thought the two of us alone were a handful, but some of the others have been worse than 'Silence of the Lambs'." Although devoted to helping foster children, Nikki now finds herself in a position where she has to refuse them entry to her home. With seven foster kids already and three children of her own, resources, not to mention patience levels, are already stretched thin. "It would be hard with 10 normal kids, but in a household where seven children from different dysfunctional families are dealing with their own issues and spending time with their own parents, tempers often get frayed," she says, voicing her frustration that spending quality time with each child is an impossibility. ...read more.

"These kids are our future. They are bundled with emotional issues that are beyond most people's comprehension so they need a lot of love and a lot of understanding. This is something they just can't get if they are shoved in with 10 others like them." Though Nikki agrees, she believes the problem needs to be tackled from another angle. She says that the focus needs to shift onto trying to keep families together rather than taking kids into care. "We need to take a whole new approach because we just won't get a flood of people suddenly wanting to be carers. If I had my time over, I'd adopt rather than foster because these days there are just too many factors against you." While Rowland talks of new strategies on the drawing board, designed to encourage people to consider foster parenting, he says until they are put into action, Nikki, and others like her will be the saving grace of foster care in Queensland. At this Nikki smiles somewhat tiredly and as the minibus holding her ten kids pulls into the driveway she says she is expecting another two sisters to arrive into her care next week. "It's only a temporary arrangement," she says. "But perhaps I should invest in a set of plastic plates...just in case ...read more.