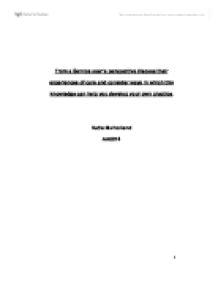 From a Service user's perspective discuss their experiences of care and consider ways in which this knowledge can help you develop your own practice. Katie Mulholland AA0074 This essay will discuss one aspect of care, from a service user's perspective, and consider the way in which the knowledge gained can help a student to develop their practice. The aspect of care chosen for discussion was the advice given to a service user who visited his general practitioner complaining of the symptoms of depression. The rationale for the choice was the fact that depression was considered to be a significant current issue since it is a common condition. According to Depression Alliance and SANE (2007) depression is the most common mental health problem in the UK, affecting as it does, between eight and twelve per cent of the population in any year. Moreover, the majority of people with depression receive almost all their care from their general practitioner (GP). The National Institute for Health and Clinical Excellence (NICE) (2004) found that eighty per cent of depression was managed in primary care. ...read more.

Mr. S. got the impression that his GP was too busy to listen to him that day and felt that she had "fobbed him off" quickly and had not listened to him properly. He was unhappy that he had not been given adequate time to explain more about how he was feeling. However, this differs from the experiences of the majority of patients surveyed by the Depression Alliance and SANE (2007). They asked four hundred and fifty people with depression to share their thoughts on depression management. They reported: - "the majority of people with depression (eighty per cent) stated their GP was interested in seeing them and hearing about their symptoms." Depression Alliance and SANE (2007:8) It may therefore be suggested that although Mr. S had an unfortunate experience, he was in a minority, because most clients were satisfied with their experience of care. The evidence would suggest that all health professionals, including nurses, should always make the client feel that they were interested in what they had to say. ...read more.

However, Pilkington, Rampes and Richardson (2006) cautioned that there were questions that still needed to be answered with respect to the effectiveness and appropriate role of complimentary therapies. It may have been helpful if a holistic approach had been taken to Mr. S's care and he had been given a list of registered complimentary practitioners. He related that he had found his local support group particularly helpful because he could discuss his experiences with other's who understood how he felt, and he had met people who had recovered from depression, and others who had managed to live with it. Mr. S wondered why his GP had not told about where to access help but had just given his medication. In conclusion, it may be suggested that, after considering Mr. S's experience of care, the implications for a student's professional development are that health care professionals should always listen to clients and make the client feel that the carer is interested in them. It may also be useful for a student's development to understand the part that complimentary therapies and exercise programmes may have to play in a client's care, alongside medication. ...read more.