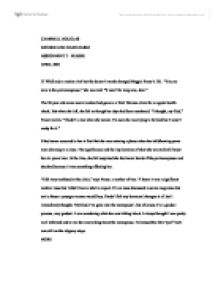 CAMPBELL DOUGLAS GENDER AND JOURNALISM ASSIGNMENT 2 - FRASER APRIL 2003 IT WAS only a routine visit but the doctor's words changed Maggie Fraser's life. "You are now in the perimenopause," she was told. "It won't be long now, dear." The 39-year-old career social worker had gone to a Well Woman clinic for a regular health check. But when she left, she felt as though her days had been numbered. "I thought, my God," Fraser recalls. "I hadn't a clue what she meant. I'm sure she was trying to be kind but I wasn't ready for it." It had never occurred to her at first that she was entering a phase when her childbearing years were drawing to a close. The significance and the implications of what she was told still haunt her six years later. At the time, she felt surprised she had never heard of the perimenopause and shocked because it was something affecting her. "I felt very confused at the clinic," says Fraser, a mother-of-two. "I knew it was a significant medical issue but I didn't know what to expect. ...read more.

What is actually happening is a gradual decrease of oestrogen. The main symptoms are shorter, longer or unpredictable periods with a heavier or lighter flow, low blood sugar, fatigue several days before periods, weight gain, decreased sex drive, headaches ranging from mild to migraine and a dry and/or itchy vulva or clitoris. Some women have increased yeast infections. Sufferers are advised to talk to other women and compare notes. Practical advice includes stabilising blood sugar levels by eating at regular intervals and avoiding missing meals, especially breakfast. MORE FRASER 3 Women who feel they need help are advised to seek the advice of a health professional. However, the homeopathic route offers alternative treatments using natural remedies without the potential cost and side effects of conventional medication. Dong Quai is a natural herb taken by Asian women for centuries. Experts point to significantly fewer complaints of perimenopause from the Far East. Described as a female ginseng and overall sexual tonic, it is said to regulate the hormonal and menstrual cycle but can also lead to heavier flow. It is not recommended to take Dong Quai during the week of a period. ...read more.

She is under no illusion about what the future holds. "The real thing is still to come and HRT is life-threatening. What a bloody awful choice - but I'm not there yet." Fraser takes heart in sharing her thoughts with other women. Her sister is 52 and was never affected by the menopause or its predecessor. Fraser works with a group of women and finds the subject easy to talk about though harder to contemplate during the quieter, more solitary moments. She says: "You do expect to go through the menopause and we talk endlessly about how all our clothes don't fit round the middle and the change in menstrual cycle. But the irony is, we're still capable of having babies. It's bizarre." Her advice to young women yet to reach the crucial age is to be aware that it's going to happen, not to be afraid and to look after personal health. Reflexology helps control her hormones. But she insists that education is the key. "I really think it's important to raise this issue and link it with other aspects of women's lives associated with being forever young. We're still being held hostage by our hormones." ENDS LOG OF GENDER-RELATED PROBLEMS ON THIS JOB None ...read more.